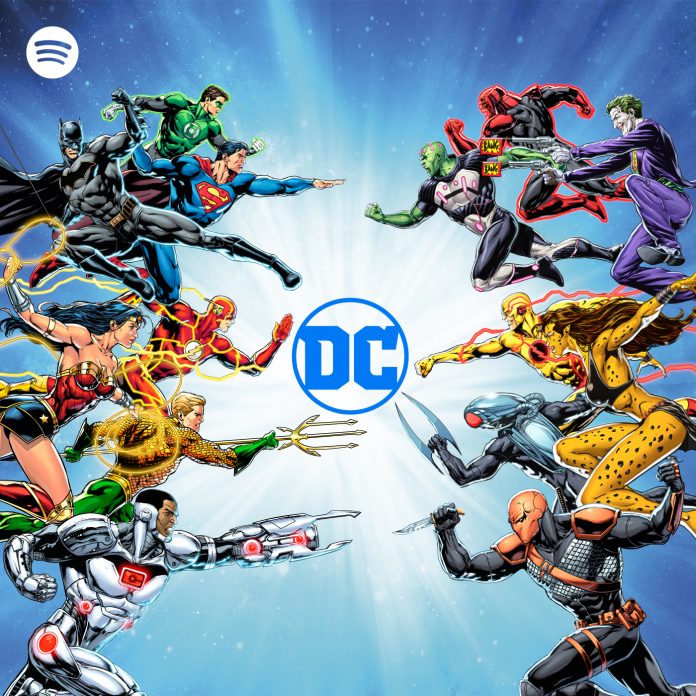 DC Comics, Warner Brothers, and Spotify have announced a new multi-year agreement that will bring scripted podcasts starring DC characters to the masses. Under the deal, Warner Brothers will develop and produce the new podcasts, which Spotify will receive a first look at hosting on both their free and paid subscription services. The podcasts will reportedly range from dramas to comedies, and will feature both existing characters and newly-created characters for the DC Universe.

Along with the announcement, DC and Spotify shared a teaser for their collaboration, as well as cover art (seen above) for the new DC show page.

DC is the latest comics publisher to make a foray into the world of scripted podcasts. Marvel Comics had success with a pair of Stitcher original podcasts starring Richard Armitage as Wolverine. The publisher’s offerings through Serial Box, while more in line with audiobooks than scripted podcasts, have also expanded their reach into the audio entertainment market.

No word yet on when the first DC podcasts might start appearing on Spotify, but you can see the full press release announcing the partnership below.

Partnership to Leverage Premier, Iconic DC Characters and Also Draw Upon the Studio’s Broader Collection of Timeless Titles to Create a Slate of Narrative Scripted Podcasts for the Spotify Platform

BURBANK, Calif. and NEW YORK (June 18, 2020) — In a collaborative and innovative effort to further increase premium content offerings for consumers, Spotify, Warner Bros. and DC (the home of Superman, Batman, Wonder Woman, Harley Quinn, The Joker and many more iconic DC Super Heroes and Super-Villains) today announced a new multi-year deal to produce and distribute an original slate of narrative scripted podcasts, marking the first pact of its kind between the companies. Spotify, the world’s leading audio streaming subscription service, is committed to an annual slate of new dramatic and comedic podcasts that Warner Bros. will develop and produce. Under terms of the deal, Spotify will have a first look at original scripted narrative DC podcasts, including new shows based on the vast universe of premier, iconic DC characters. The initial slate of projects under the partnership will also tap into Warner Bros.’ broader collection of timeless titles for additional series. In addition to producing narratives based on existing characters and established franchises from across Warner Bros. and DC, the companies will also collaborate to create new programming from original intellectual property.

On the Warner Bros. side, the partnership will be managed through a cross-divisional effort led by Peter Girardi and Robert Steele, who will co-develop and produce the programming in collaboration with Spotify, which will be responsible for the marketing, advertising, and distribution of the shows exclusively on its platform. Girardi — Executive Vice President of Blue Ribbon Content and of Alternative Programming at Warner Bros. Animation — will serve as the creative lead, and Steele — Senior Vice President, Business Strategy and Operations, Warner Bros. Digital Networks — will spearhead strategic business aspects of the partnership for the Studio.

“As we continue to see explosive growth in podcasting around the world, we are thrilled to partner with Warner Bros. to build this slate of programming drawn from the worlds of DC and WB,” commented Dawn Ostroff, Chief Content and Advertising Business Officer, Spotify, who continued: “We could not be more excited to be working with Robert, Peter and the entire Warner Bros. and DC teams to deliver new exclusive stories to the more than 286 million Spotify users.”

“Warner Bros. has been synonymous with compelling and unforgettable storytelling for nearly a century, and we’re continuing to expand that legacy across all types of media platforms for our fans,” said Robert Steele and Peter Girardi, in a joint statement. “Spotify’s deep engagement with its consumers and commitment to prioritizing their podcast vertical makes them an ideal partner in this endeavor. We’re excited to bring beloved characters and franchises from DC and Warner Bros. into this new world and to use our storytelling prowess to redefine what’s possible in the scripted audio space.”

The agreement with Spotify continues Warner Bros.’ commitment to storytelling across all platforms and builds upon a January 2020 first-look deal WBDN announced with Rainy Day Podcasts — a new company formed by Jagged Films partners Mick Jagger & Victoria Pearman (“Shine a Light,” “Get on Up,” “Vinyl,” “Enigma”), producer Steve Bing (“The Polar Express,” “Marley,” “Neil Young: Heart of Gold,” “Shine a Light”), and Oscar®-nominated writer Josh Olson (“A History of Violence”) — to produce a slate of original narrative podcasts. 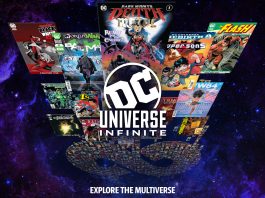 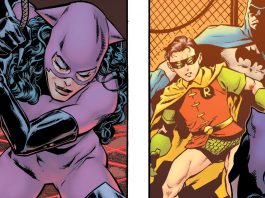 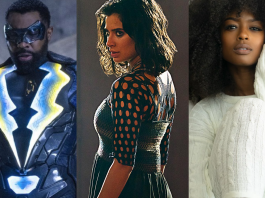 DC Fandome part 2 gave us so many teases from BLACK...