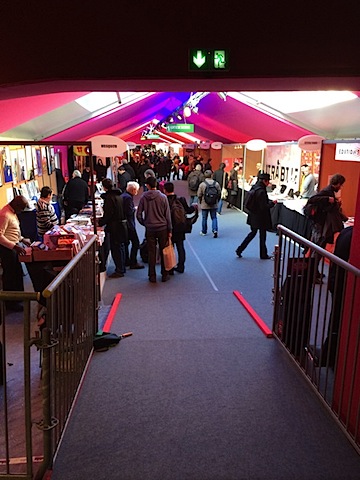 [A shot from the Indie tent at Angoulême]

It is generally accepted among those who have been to both that European comics festivals are superior to US comic-cons in the respect paid to artists, the quality of exhibits, the treatment of guests and the fact that some take place in ancient castles. All the FB posts about leisurely four hour dinners with other guests would be the envy of a US show. However, in one respect artists at Euro festivals have it a bit harder than is customary in the US: at many festivals, particularly France, it is customary for artists to do free sketches for attendees, and these are not expected to be quickie sharpie doodles, but detailed drawings, sometimes in color.

It’s a lovely custom, but the practice has now become hours of sketching for giant lines of folks who sometimes turn around and get right back in line. And of course some of the sketches are immediately bayed. When I was at Angouleme I witnessed the sketch lines at the publishers tables, and they were prodigious, with folks camping out overnight to be first in line. Artists told me that the signings/sketching periods were intense. And some folks told me that the custom was being reconsidered.

I’m not sure exactly where I stand on this—I’m sure there is a tradionitalist view, and I’m sure some would say a two hour sketch-a-thon is a trade-off for the leisurely four hour dinner. However, one French show, the Paris Comics Expo, is changing its policy to one more in line with the US: Artists in artist’s alley can sketch IF THEY WISH, but no more mandatory drawings. And they will be able to charge for drawings, as they do in the US. There will still be one hour signings at publishers booths where the sketching rules apply. The Paris Comics Expo is a bit more of a US-type show, with mainstream guests and a few celebrities. They sent out the following letter:

Starting this year, we have decided to change an important aspect of our convention—the artist alley. We’ve spent a long time looking at how to improve the way we run artist alley to ensure that artists are treated fairly and that as many fans as possible are satisfied.

Sadly, the “French system” in place in many conventions, where artists come to draw gorgeous pieces that are given away to either a small handful of lucky winners or to the very courageous who wake up at 2AM to be the first in line, seems old fashioned, out of date, and pretty unfair to, well, mostly everyone.

What fan has never been angry when someone who won a sketch from a lottery system knew nothing about the artist who drew it. Who hasn’t been frustrated when a free sketch is immediately sold on famous auction websites without any retribution going to the artist?

We sincerely believe it’s time to change this incredibly unfair and outdated system.

Beginning with our third annual “Paris Comics Expo” at the end of this November, we will let the guests and artists take control of their tables in artist alley. This means that every guest, not only the actors, will decide the conditions and costs of sketches and signings. Additionally, every guest will also be present for one hour in their French editor’s booth (the whole schedule will be available on the website).

We’d like to reiterate that the purpose of these changes is really to be able to satisfy as many fans as possible instead of catering to the same “sketch chasers” who come to every single convention. Requiring attendees to pay artists for elaborate and time-consuming sketches (do we need to be reminded once again that it is the artists’ job and not just their hobby) will probably generate lots of outraged comments, but we are convinced that most reactions will be positive and enthusiastic and that these changes are going in a good direction. Just to be clear, fans and artists will communicate directly about these conditions—we will not be involved and certainly will not receive a commission from these transactions.

We will try to communicate everyone’s decisions as soon as possible so you can plan to have a great weekend at our show.

The present editors will decide and announce the artists and the conditions for signings and sketches that take place in their booths.

It is a difficult time for comic book artists, and we sincerely hope that this new system will make them more available for their true fans while creating a fairer system for everyone.


There’s more at the Paris Comics Expo FB page. Now, I have a few lovely Euro-style signed books that I treasure—but part of the complaints seemed to be that some of the recipients of sketches had no idea who they were getting them from and just wanted to ebay the art. I’m sure there are nuances to this policy change that I’m not aware of, but it’s another sign of the times with how the con/guest/fan interaction is changing around the world.

INTERVIEW: Theresa Chiechi on the creative process behind ITHAQA and DRAWN TO KEY WEST