UPDATE: see information on how to buy Walden’s books at the bottom of the post.

You know how you hear a name or a word for the first time and then suddenly that name or word is everywhere? Well that name is Tillie Walden, a student from Austin, TX, currently a student at the Center for Cartoon Studies in VT, who is poised to be one of the hottest cartoonists of 2016, after an already spectacular 2015. (Word on the street is that she may have even been part of the inspiration for this infamous comic.) Walden is  not yet even 20 years old (she was born in 1996) and already has amazing drawing chops and solid storytelling—she has several short comics posted on her site that you can read in their entirety. Broken Frontier just named her their Breakout Talent of 2015 and if this is the first time you’re hearing about her, it’s probably not the last.

I Love This Part, a queer love story, and The End of Summer are both published by the UK’s Avery Hill. They’re available in the US via Retrofit.

The logline for the story is

“In a secluded castle, at the beginning of a winter that is predicted to last for three years, Lars is battling illness, boredom and the pressures of family life. Locked inside for the duration, he passes the time playing with his siblings and his giant cat, Nemo, while tensions within the family begin to simmer.

Tillie Walden tells the tragic and moving story of Lars and his twin sister, Maja. A melodrama full of subtle and tender character moments and set in an exquisitely rendered castle, it’s a hauntingly beautiful work that will no doubt be considered as one of the great debuts of 2015.”

For 2016 she has another book from Avery Hill, A City Inside according to The Guardian.

So just to spell this out: Walden is 20 and already has three graphic novels out or coming out. And her thesis comic for CCS, which is about her years as a figure skater. *Samples below via Twitter.) Makes you feel old and busted, right?

Walden has a big reputation in indie circles and was already interviewed at Vulture, so she’s not exactly an unknown:

You’re about to graduate from the Center for Cartoon Studies; you’re working on your thesis, which is a graphic novel; you already published one book while in school, and now there’s I Love This Part. How do you get so much done?

I have to get ten hours of sleep every night — I refuse to ever let comics interrupt my sleep. I go to bed at 8 p.m. every night like an old lady. But I’m also at the point where I don’t struggle with drawing at all, so as long as ideas are flowing and I’m working on something interesting, I can draw anything. I’m also not afraid to make pages and get rid of them. When I was younger, I thought the pages I made had to be the perfect reflection of my vision, but now I know things don’t work like that. I just made 50 pages of my thesis, and I’ll use maybe 30, but making 20 bad pages is still good because I’m still being productive.

American comics have a long history of teenage phenoms, from Joe Kubert to Kyle Baker. I’ve been talking about how the improved educational institutions for comics–CCS, SAW, SVA, SCAD and so on—is turning out more and more fully formed talents; Walden is the latest creator in this mold and in generational terms, she’s like a MacBook Air compared to a Macintosh SE. These new models are pretty fast.

You can buy both of Walden’s books digitally via Sequential. Or via Retrofit in the US:

End of Summer
I Love This Part

and Avery Hill in the UK.

The End of Summer
I Love this Part 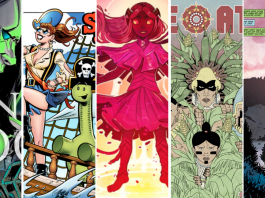 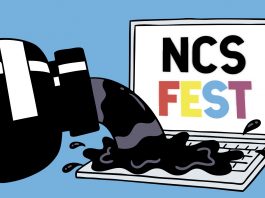 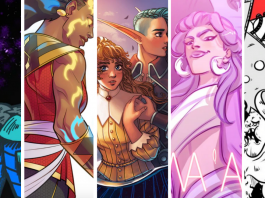