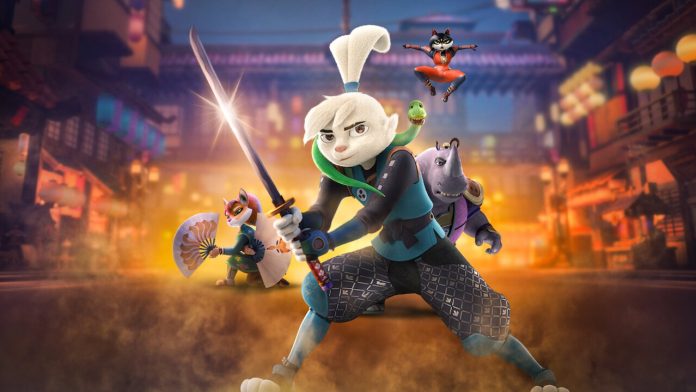 After nearly four decades in print across multiple publishers, comic creator Stan Sakai’s beloved Usagi Yojimbo series has finally received its own long overdue animated series with Samurai Rabbit: The Usagi Chronicles. Obviously, this isn’t the anthropomorphic samurai rabbit’s first venture into the animation medium and I think it’s fair to assume that the majority of people (myself included) were likely first introduced to Miyamoto Usagi, through his guest appearances in the various Teenage Mutant Ninja Turtles cartoons, including the recent 2012 CG-animated series from Nickelodeon. Given Sakai’s affiliation with the TMNT franchise, any comparisons to the terrapin warriors are completely understandable (as you’ll discover throughout this review). Though previously a guest star, this time around audiences will truly be able to dive into Sakai’s world albeit with a slight caveat.

Let’s address the elephant (or your animal of choice) right off the bat. Usagi Chronicles is a bit of a misnomer as this isn’t a straight adaptation of Sakai’s original comics but rather an original storyline that follows Usagi’s descendant in the far future of Neo Edo in a mix of sci-fi tech, magic, and classic Japanese culture. While I’m sure most fans would have likely preferred a direct adaptation that is already ripe for the animation medium, Sakai not only approved this specific take pitched by Gaumont Animation but was very involved in every step of the process. It’s an approach not dissimilar to what Bruce Timm and company took with Batman Beyond when tasked by the network to create a new teenage Batman show in order to appeal to a younger demographic. Fans, and even the producers themselves, weren’t sold on the idea from the get-go but eventually, Batman Beyond overcame the odds and became a rich addition to the Batman mythology.

Gone is a traditional Japanese wandering ronin story and instead, we are treated to aspiring samurai Yuichi Usagi who along with his friends and fellow misfits defend Neo Edo against the strange and unusual yōkai demons of Japanese mythology. Yōkai are a frequent and major element of the Usagi Yojimbo comics, but their inclusion in Samurai Rabbit has a quasi-Ghostbusters feel to them as Yuichi and friends are tasked with capturing and even befriending them throughout the series.

It’s no surprise Samurai Rabbit puts a greater emphasis on humor than perhaps the source material. It certainly plays to the strengths of Candie Kelty Langdale and Doug Langdale who serve as executive producers and co-developers. The husband and wife animation writing team are probably best known for their comedy work in animation such as various Scooby-Doo straight-to-video movies but have also demonstrated a unique ability to balance both humor and rich serialized storytelling with more recent projects like the acclaimed Maya and the Three. The series in no way dumbs down the property for the sake of simplicity or to skew to a younger viewership. True, Yuichi is bestowed a mystical yo-yo to aid in the capture of yōkai but thankfully he still retains his sword and isn’t stripped of his signature weapon à la TMNT’s Michelangelo and nunchucks. Samurai Rabbit reminded me at times of the aforementioned Nickelodeon 2012 TMNT CG-animated animated series, both aesthetically and tonally, which seems quite fitting since Doug Langdale wrote several episodes for two seasons on that version of the franchise.

In contrast to his stoic ancestor Yuichi, voiced by Darren Barnet, is the perfect personification of the arrogance of youth. Since his breakout role as Paxton Hall-Yoshida in the Netflix series Never Have I Ever, it’s no exaggeration to say that Barnet has become something of a heartthrob garnering an ardent following. With Samurai Rabbit as his first lead animation voiceover role, Barnet proves there’s more to him as an actor than just a pretty face. There’s a charm and cadence to Barnet’s vocal performance that is somewhat reminiscent of Dante Basco. If that weren’t enough, Barnet also pulls double duty providing the vocal effects for Spot, Yuichi’s pet dinosaur-like creature known as a tokage.

While Yuichi may be an original creation for the show, the classic comic book supporting characters do appear including rhino bounty hunter Gen (Aleks Le), fox street performer and thief Kitsune (Shelby Rabara), and the cat kunoichi Chizu (Mallory Low). It’s a strong and stellar ensemble cast brought together under the guidance of voice and casting director Meredith Layne, who incidentally won an Emmy Award for Outstanding Casting for the 2012 TMNT cartoon. Try as he might, I guess Miyamoto Usagi can’t completely escape his association with the Turtles! Although they are reinterpreted to fit into the tone and world of this new animated series, they still remain true to the core of the characters.

Actress Mallory Low, who first came to my attention through her performance as the villainous Livewire in the current iteration of the DC Super Hero Girls cartoon, is a particular standout as Chizu in my opinion. I’ve been delighted to observe her rising career in the last few years both in animation voiceover as well as in live-action, most notably in the Netflix comedy-drama The Chair. Remarkably, Low imbues the hardened Neko Ninja with a vulnerability and poignancy I wasn’t expecting. Chizu’s scenes with Neko Ninja leader Lady Fuwa and young trainee Hana, two divergent characters both voiced by the phenomenally talented Mela Lee, are guaranteed to tug at the heartstrings.

Fans feeling wistful for the original samurai rabbit can take some comfort that Miyamoto Usagi does have a presence in a series through flashback sequences rendered in beautiful 2D animation. Granted, these sequences are fairly brief, but I’m hoping that Miyamoto is featured more prominently if Samurai Rabbit continues. He is voiced by Japanese actor Yuki Matsuzaki who first played the character in the previously referenced CG-animated TMNT cartoon. It’s incredibly gratifying to see Matsuzaki reprise Miyamoto Usagi given not only it was his first voiceover gig but he is an unabashed fan of Sakai’s comics and cites them as helping him learn English in America.

My only real genuine complaint is the reliance in the season finale on everyone’s favorite “giant sky beam” cliché and the customary portal that unleashes a horde of faceless invaders. I had hoped that 2015’s FANT4STIC would have been the death knell for this tired trope, so can we please officially put a moratorium on sky beams and/or sky portals for the foreseeable future?

I’ve noted in the past how rare it is for even the best series to completely knock it out of the park with the first episode or even the first season. I felt that the Invincible animated series for instance stumbled somewhat in those initial episodes, which worked in its favor as a mirror to the main protagonist’s own journey, but really came together by the end. I see the same possibility for greatness in the titular hero in Samurai Rabbit.

Overall, the first season of Samurai Rabbit: The Usagi Chronicles may be rough around the edges in some areas but has the potential to truly enhance the profile of Stan Sakai’s characters for a new generation. I only hope that Netflix’s current subscriber loss woes and recent shakeups with Netflix animation don’t kibosh the animated show’s future.

INTERVIEW: Will Friedle plays both sides as Lex Luthor and Aquaman... 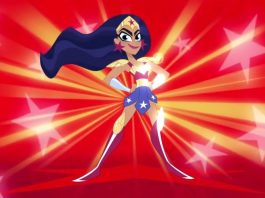 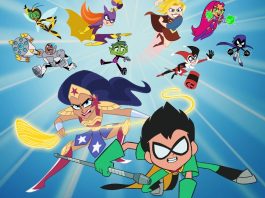