Vampire fiction runs the gamut, from the creeping Victorian horror of Dracula, to the romance Twilight, to the thinly veiled homoerotica of Carmilla, to the science fiction wasteland of Vampire Hunter D. The lore is rarely consistent, the only binding aspect that of blood drinking. Lovers of vampire fiction can often be divided into those who love genuinely terrifying monsters and those who enjoy surrounding themselves with all things darkly beautiful. For those who like to strike a balance, there is Hellsing.

Initially translated into English as a collaboration between Dark Horse and Digital Manga Publishing in the early 2000s, Hellsing follows the maneuvers of the Hellsing Organization, led by Sir Integra Fairbrook Wingates Hellsing. Sir Integra, a young bespectacled woman with an affinity for thin cigars, utilizes the services of the dread vampire Alucard to keep England free of monsters. In the pursuit of a vampire priest, Alucard turns a young police woman, Seras Victoria, into a vampire whose need to learn the ropes allows the reader an in with this secretive group.

Seras, known as “Police Girl” by most, is hesitant to drink human blood or live in a coffin, grasping on to her remaining humanity and grappling with her steady transformation into a monster. Her newfound abilities are necessary, however, in the fight against Millennium, a holdover Nazi organization led by a man who was a Lieutenant in the SS during World War II, now known as The Major. The Major’s chief concern is to plunge the world into war once again, lusting after the chaos, violence, and upheaval that war brings. The Hellsing Organization isn’t the only group invested in defeating Millennium, however; the Vatican’s mysterious Iscariot Organization has deployed their hideously powerful  Father Alexander Anderson whose bloodlust for Alucard occasionally threatens his ability to perform his duties. And though Alucard, Seras, and Anderson are all incredibly hard to kill, Millennium has another ace up its sleeve: They have been building an undead army for decades, scientifically modifying their ranks to be stronger.

Vampires and Nazis are the cornerstone of pulp comics, and Hellsing unashamedly leans all the way into the absurdity of the circumstances. Everything is over the top, especially the blood spray. Though surprisingly, Alucard favors his twin guns over feasting on his enemies, and Seras wields a ludicrously long cannon called the Harkonnen. Indeed, the manga is a treat for gun enthusiasts and anyone who appreciates some stunning displays of violence. Alucard, though ostensibly the protagonist, is not a “good guy.” He is a servant to the Hellsing Organization, answering specifically to Integra, but he has no qualms about killing anyone who gets in his way, and he delights in destruction. In fact, he and Integra’s butler, Walter, had defeated Millennium once before, and Alucard delights in the prospect that he can do battle with them once again.

For years, fans have been awaiting a reprint of this sexy series, and Dark Horse has not only finally complied, but pulled out all the stops for a deluxe edition. With a blood red hardcover, ribbon bookmark, and nearly 700 7″x10″ pages of gruesome adventure, Hellsing is a beautiful addition to any serious manga collector’s shelves. The translation has not been updated since its initial pass in 2003, but in this case the text does not feel dated — though the use of the Papyrus font for chapter subtitles might feel jarring for some. Its $50 price tag and unwieldy page count does make it an unfriendly option for the uninitiated, and the fact that this is the only version currently available may negatively affect sales. But for those who have been seeking an unbridled, unforgiving, and unhinged vampire story, the gorgeous and ghastly first deluxe volume, containing the first four original volumes of the series, is available through Dark Horse starting July 15, 2020. 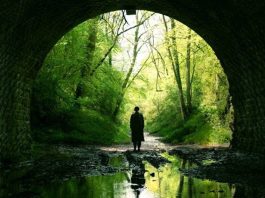 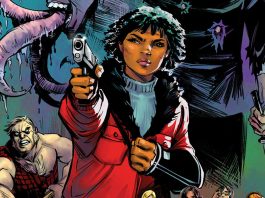 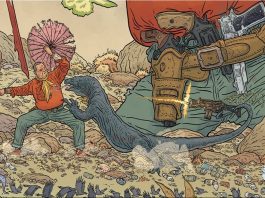