Merry Christmas! Looks like Christmas came early in the MCU, and Hawkeye is the gift that keeps on giving. “So This is Christmas?” kicks off right where the last episode left off, revealing that Eleanor is, indeed, working with the villainous Wilson Fisk (Vincent D’Onofrio). Through their conversation we learn that Eleanor started working with Fisk after her husband died, leaving her with a massive debt to Fisk. Since then, she’s made Fisk, and herself, a load of cash.

But, with Kate getting involved in her dealings, Eleanor is ready to end their working relationship. She admits to killing Armand and framing Jack for Sloan Ltd. Unlike Fisk, there is a line that Eleanor won’t cross and she doesn’t want to endanger her daughter. That Fisk says the line doesn’t exist makes it clear that not even his relationship with Maya is safe. Eleanor threatens Fisk after he tries to persuade her to stay, saying she has all the evidence in a safe place before walking off.

Unbeknownst to both of them, this conversation is being recorded and Kate and Clint are watching. This is shocking for Kate and she needs to talk to her mom, but Clint is more concerned about Eleanor. Getting on the wrong side of Kingpin could spell serious danger for them, and when Kate tells Clint to go home to his family, he says those magic words. Kate, you’re my partner. I know, I clutched my chest too when he said that.

With a change of wardrobe, Fisk and Kazi meet with Maya. The conversation between them is a little stilted. Maya suspects the truth and none of Fisk’s comforting words can ease the suspicion. For what it’s worth, it does seem like Fisk loves Maya but… can someone like Fisk ever really love anyone truly without some level of toxicity? Maya asks for a few days off, and Fisk tells her that he loves her and she replies back that she loves him too. When she’s gone, Fisk notes that Maya has turned on them, and tells Kazi to remind the people that the city belongs to him.

Back with Clint and Kate, Clint decides that it’s time to start making some way-too-dangerous arrows and it’s time for a very Home Alone inspired sequence where we see Clint and Kate making some wild trick arrows and finally labeling them for once! During craft time, Clint sees Kate still reeling from the recent revelations and says, “It is part of the job. It’s always inconvenient. It’s lonely. You will get hurt. Heroes have to make some tough decisions. So, if you’re gonna do this, I just wanna know you’re ready.”

But, Kate tells him about how she saw Clint for the first time fighting the Chitauri as an Avenger. “Fighting aliens with a stick and a string,” jumping from buildings even though he couldn’t fly, he inspired her, even as a man without superpowers. “You showed me that being a hero isn’t just for people who can fly or shoot lasers out of their hands, it’s for anyone who’s brave enough to do what’s right, no matter the cost,” she says. She’s ready, and so are we, bring it on!

It’s Bishop Security Holiday Party night! Kazi and the Tracksuit Bros are in position to take out their targets which not only include Eleanor, but Clint and Kate if they manage to catch them, and probably also Maya. Clint and Kate arrive at the party dressed in style, and their LARPer friends are in the catering staff helping out as a backup. Also at the party is Jack, bailed out of jail by the young Armand’s dad, and wielding a ridiculous sword. It’s a weird flex, and one of the most eccentric rich people accessories. It’s perfect. We love Jack.

But more players enter the game when Yelena walks into the party and soon Eleanor arrives at the party. Kate confronts her with the proof of Eleanor working with Kingpin, but Eleanor is eager to explain that she has everything under control. Of course, it’s not under control because Kazi spots Clint and shoots him with a sniper rifle, causing chaos to erupt. Kate goes after Clint, Eleanor makes a run for it, and Jack decides this is the time to unsheathe his sword.

Kate chases after Yelena when she spots her going after Clint. The two have a hilarious exchange in the elevator where Kate manages to press all the buttons to delay Yelena’s chase. It works for a bit but Yelena rappels out of the window of 30 Rock and Clint just manages to dodge her bullets. Kate goes rappelling after her, barely landing on her feet, only to be spotted by the Tracksuits.

She fights them, but not before meeting Tomas (Piotr Adamczyk) again and him giving an inopportune thank you for her advice about that Imagine Dragons debacle with his girlfriend. They went to Maroon 5 instead, it was great. Good for Tomas. The other tracksuits aren’t so happy to see Kate, but no worry, Jack is here! Yes, Jack Duquesne drops in, sword in hand, and takes on the tracksuits with style and panache.

Upstairs in the building, Clint takes on Kazi, but let’s be real, Clint is an Avenger and the fight is brief. He knocks out Kazi and then he too jumps out of the window. But instead of landing on his feet, he falls and lands in the tree at Rockefeller Center. Also in the tree? An owl. Yeah, an owl. Kate decides that it’s time to get Clint out of the tree, and the way to do that is in the classic Avengers destructive manner. Timber! The tree is going down!

Clint lands in the ice rink and Kate rushes in to help him. They are surrounded by the bros, and they need to fight their way out. Clint takes off his dress shirt and beneath it is superhero suit! Good job to Missy on that sewing! It’s time, Kate. It’s time, everyone. It’s time for the trick arrows. Clint and Kate unleash a whole mess of crazy trick arrows that take out the droves of the tracksuit bros coming at them. And Chekov’s Pym arrow and Chekov’s owl make an appearance. I mean, those bros deserve jail but not to be potentially eaten by a giant owl!

At this point, the two split up. Kate goes after her mom, and Clint takes on Kazi but he’s quickly interrupted by Yelena and Maya attacks Kazi. Kate finds her mom but she’s being threatened by Fisk. She shoots him point-blank with an arrow, but it doesn’t even make him flinch (more on this in Stray Arrows). Instead, somehow Eleanor gets into a car and rams it into Fisk, sending him flying into a toy shop.

Now we have Clint fighting Yelena, Maya fighting Kazi, and Kate fighting Kingpin. Clint tells Yelena that Nat sacrificed herself to save the world, but Yelena doesn’t believe him at first. The two fight and it’s not until Clint whistles the secret whistle that Yelena and Natasha shared that she stops her attack. Finally accepting her sister’s fate, the two reconcile through their mutual love for Natasha and she decides not to kill him.

Maya’s fight with Kazi is a little less climactic. Kazi repeats to Maya that this is his life, and even though she asks him to leave with him, he says that he can’t. Maya tells him that it’s not too late, “If you’re brave enough to choose it, we can walk it together.” But Kazi tells her that’s impossible, unlike Maya, he can’t walk in both worlds. Then he attacks her, forcing her to defend herself and killing him. With his dying breath, he tells her to leave before Kingpin comes for her.

Getting up from the car hitting him, Fisk is stopped by Kate, who is very much not a match for Fisk. He tosses her around like a rag doll and breaks her arrows in half. But, Kate manages to grab one of his cufflinks, and using the coin trick that Clint taught her, she flicks the link at the broken arrows on the ground, sending off a chain reaction, knocking Fisk out yet again.

Going to her mom, Eleanor promises that everything will go back to normal, but Kate knows that isn’t true. Eleanor tells her that she did everything for Kate, “I know what it’s like to have nothing, and you can’t handle it.” But she’s going to have to handle it without her mom around because the police come and arrest Eleanor for Armand’s death. Before she’s taken away, Eleanor asks, “Is this what heroes do? Arrest their mothers on Christmas?” Ouch, Eleanor.

Despite getting a bunch of trick arrows to the face, Fisk makes his way out, limping into an alley. A Trust-A-Bro truck drives up, but inside is Maya. She takes out a gun, and while Fisk reminds her that they’re family and sometimes family doesn’t see eye to eye, the camera pans away and we hear a gunshot. Obviously, as we all know by now, no body, no murder. It’s safe to say Marvel wouldn’t bring D’Onofrio and Charlie Cox‘s Daredevil back into the MCU just to kill off one of them after one episode.

The police arrive after the fight and the LARPers explain what happened. Wendy tells Jack about perhaps pursuing LARPing as a hobby, but he’s gonna need to figure out how to get the blood out of his tie first. Sitting in an ambulance, Clint tells Kate, “It doesn’t happen too often, but, every once in a while, you come across somebody that just makes you better in every way,” but plays it off by complimenting Missy’s work on the costumes. It’s a sweet moment and something that Kate needs after watching her mom get carted off.

Out of all the new younger generation of Avengers, Kate is easily the most fully formed and interesting, with Yelena coming in a close second. Hailee Steinfeld‘s scenes with Jeremy Renner really do pop, and her vivacious energy plays perfectly off of his serious one. But even in these more somber scenes, the chemistry between the two actors is electric. Never thought I’d want more Hawkeye, but after this series, I can’t wait to see what the future holds.

In the morning, we see Clint keep his promise to his family. He drives back to the Barton farm on Christmas morning not only with a bundle of gifts but also with Kate and the officially christened Lucky, the pizza dog in tow! Kate meets the family and enjoys Christmas with the family. At the dining table, Clint hands over the Rolex to Laura. Flipping over the watch, we see the number 19 embossed into the SHIELD logo. Then he takes Kate out to the back and they burn the Ronin suit (hopefully he left the sword to Jack).

The episode ends with Kate trying to find a superhero name, but hey, we can have two Hawkeyes! The after-credits stinger offers us season’s greetings from Marvel Studios and a full performance of the “I Could Do This All Day!” song from Rogers! The Musical.

Watch the entire season of Hawkeye now on Disney+! 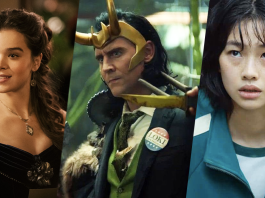 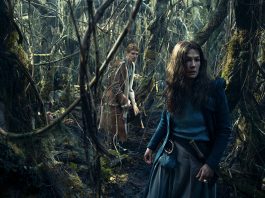 RECAP: THE WHEEL OF TIME S1E8 — What just happened?! 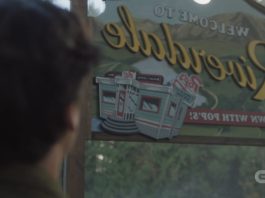