At San Diego this year, ComiXology unveiled a series of “Comic Book All Stars” trading card, in the grand tradition of cards going back to Eclipse’s famed set of the 90s. And this time, perhaps for the very first time, there are just as many women as men, with Margaret Atwood, Louise Simonson, Sophie Campbell and Penelope Bagieu among those captured on pasteboard. Of course, for nostalgics, it’s Chip Zdarsky who wins the prize:

With this callback to Todd McFarlane’s famed 90’s pose:

It’s this sense of history and tradition that makes comics great.

Atwood and Chuck Palahniuk are included as “Rookie cards,” another reference to the great tradition of collectible cards. The set comprises 31 cards and a checklist, and each includes a redemption code redeemable for a free title on comixology.com that has been handpicked by the creator.

The cards will be available at two ComiXology panels, in limited quantities. ComiXology will also be giving out a Kindle Fire HD at these panels. And the cards will be given out at selected times at their table in Artist Alley, #M3-M4.  Creator signings and card drops will be announced via social media and its Tumblr closer to the convention.

“Sequels need to be bigger and bolder than the original so we’ve upped the ante for New York Comic Con,” said comiXology cofounder and CEO David Steinberger. “Series 2 has more cards, including a card showcasing the all-ages comics creative team of Art Baltazar and Franco and a card spotlighting one of my personal favorite graphic novels of all time,March. Whether the cards are self-portraits, like Jim Cheung’s, or throwback photos like Cliff Chiang’s, they celebrate the unbridled creativity of the writers and artists who create comics.” 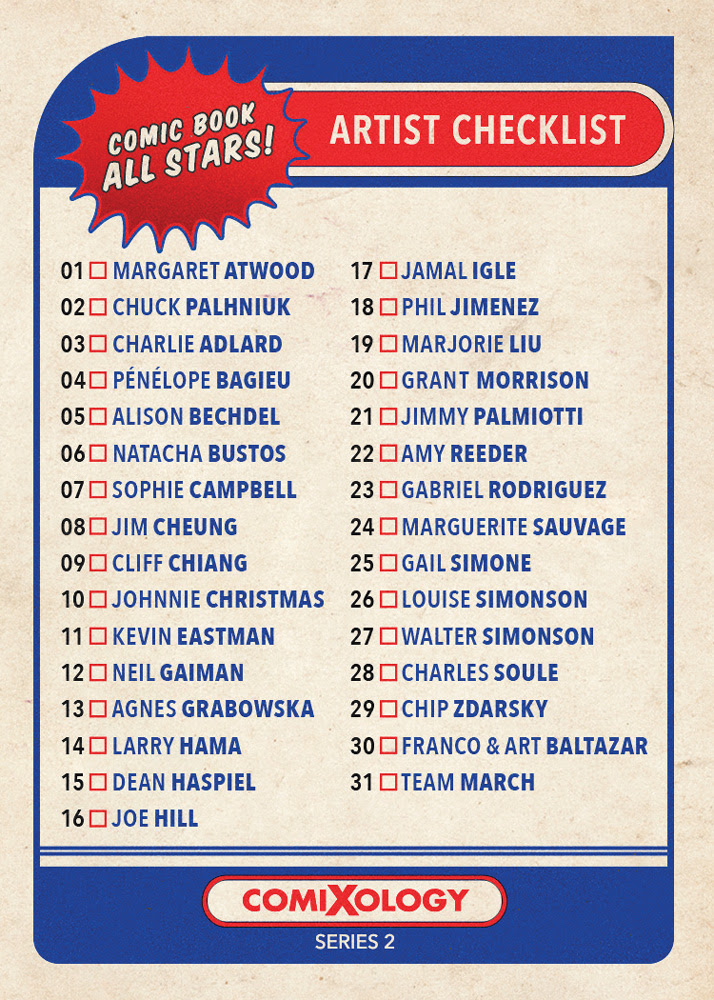 Check out the FLASH #750 decade-specific variants

KIPO AND THE AGE OF WONDERBEASTS first look from DreamWorks Animation

MY HERO ACADEMIA movie lands a release date and title

A Year of Free Comics: Explore the world of New Orleans witches in MUTED

ABOUT US
All the information you need on comics, movies, TV, toys, comic cons and fan culture.
Contact us: info@comicsbeat.com
FOLLOW US
© 2020 Syndicated Comics, LLC.