§ Nice Art: A Twitter thread showed examples of “the DeLuca Effect,”, in which comics pages ditch panel borders and characters roam freely over the page for a sophisticated warping of time and storytelliing. The above example is by Alvaro Martínez Bueno, Raul Fernandez June Chung and Rob Leigh, with a script by Ram V and James Tynion IV, all from Justice League Dark #21. Many more neat examples in the whole thread.

§ Where has Kibbles been? Well, ever since Twitter nuked Nuzzel, it’s been a lot harder to do, and also my sleep schedule was on summer hours, and I do this at night. But we’ll try to be back for a bit.

§ As for The DeLuca Effect… i think a lot of artists used this technique, as Paul Gravett wrote in the above essay, not just Italian artist Gianni De Luca, but it sounds like a cool name.

§ NeoText had a great feature by Tom Shapira on The Unsung Woman Colorists of 1980s Comics including Julia Laquemont, Lynn Varley, Adrienne Roy, Tatjana Wood and Richmond Lewis. That’s Laquemont above, and they were indeed masters of the crafts.

All of which brings me back to these colorists. The thing that all of them did so well, that set them apart (and above) many that preceded them and that would follow, is the emotional resonance of their work. They don’t go for realism, at least not as an automatic choice; their colors are constantly used to add to the emotional tone of each scene. Partly, it’s motivated by technological limitations: we are talking pre-computer coloring, we are talking cheaper pages, less chance for a redo. They did what they could with what they had. Much of what we see today, comics in which every little part of the character and scenery is colored with the same level of attention, could hardly be achieved at the time without back-breaking labor; and even if achieved it would not be as good on the type of paper available. Varley’s work on Ronin is an outlier, every single page of that series could be someone else’s career highlight, but in that case part of deal was that Miller and Varley would have larger lead-in time to make every issue and that they could pick the type of paper themselves.

§ Also from NeoText: Robert Smith on what makes Love and Rockets great.

The Tonta stories are often an opportunity for Hernandez to go large, because everything about Tonta is big and fun. She’s been the spirit of youth in the comics for the past 10 years, energetic and keen and very, very dorky. She’s got her own punk bands to follow, but is more comfortable making mini-comics with her nerd friends.A lot of them are growing up and moving on, but Tonta is happy to play the fricking loon. Her personality is right there on the page — Hernandez’s art opens up on her stories with big, splashy panels and massive emoting faces. It all gets squashed down to more claustrophobic panels when Tonta has to deal with weird real-life shit — her family gets mixed up with some gangster nonsense, even if Tonta is only ever watching from the sidelines. But then it all gets wide and open and in-your-face when Tonta goes on the rampage through the neighborhood woods, or throws a therapeutic fit on the floor of the latest house she’s been dumped in. She’s the new Maggie — a bit goofier, a little looser, a bit more buck-toothed, but the same decent person at heart. Sex is boring, (but only because everyone is doing it). She’s more into creating comics than repairing weird space machines, but Tonta is another young punk kid who never had anybody to show her the way.

§ A couple of interesting piece on fandom and and how it interacts with and often controls narrative. Annalee Newitz had a good piece for the NY Times (paywalled):

Other creators have welcomed comments from their fans online. Jonathan Nolan, co-creator of the futuristic HBO show “Westworld,” said he frequented fan communities on Reddit and even admitted to changing the show’s plot in 2017 when fans got too close to it. understand the main twists of season two. It may have backfired: Critics and fans alike complained that Mr. Nolan and the show’s other creator, Lisa Joy, had gone too far in the direction of fan service, creating an intrigue. incomprehensible and messy second season.

The online aspects of fandom are new, but the fan campaigns themselves date back over a century. When Arthur Conan Doyle killed his famous detective Sherlock Holmes in 1893, fans were outraged. Thousands of people have canceled their subscriptions to The Strand, the magazine in which Sherlock’s news appeared. Others have launched a letter-writing campaign to bring back the brilliant sleuth. Under intense public pressure, Doyle published a prequel to Sherlock in 1901, the novel “Hound of the Baskervilles”, which The Strand published serially, and he eventually rewrote literary history in 1903, resurrecting Sherlock in “L ’empty house adventure’ with a plot twist: he’s not really dead.

§ And this is an old one, but an interview with author Amanda Montell on how fandom and cults can be similar.

What’s the difference between being a fan and being a member of a cult? Despite popular use of the term, it isn’t “brainwashing,” which Cultish author Amanda Montell debunks in her new book. In fact, there’s no clear-cut tipping point at all, which is part of what makes cults seem so dangerous and mysterious. The one thing these groups have in common is how their leaders use language—and that’s something that can also be said of religious groups, fitness programs, sports teams, fandoms, and more, all of which can fall under the umbrella of cultishness.

§ There’s a comic on Tapas called Cat Teacher. That is all you need to know.

§ Sean Kleefeld, who wrote a book on webcomics, had some thoughts on the DC/Webtoon deal:

However, there’s an understated key line in the announcement that suggests the characters they won’t be focusing on. That key line is about how they aren’t releasing any details yet. “Additional details – including information about local language translations – will be supplied in the coming weeks.” That bit about local language translations is critical in pointing to their thought process here. Webtoon is owned by Naver Corporation, which is a wildly successful company… in South Korea. DC has the infrastructure already to host webcomics if the goal was strictly using the web to advertise; that was part of the point of their Zuda competition a decade ago. By teaming up with Webtoon, and with the acknowledgement that they’re very much looking at having the webcomics presenting in languages other than just English, DC is indicating that they are deliberately trying to break into the online southeast Asia market that Naver has such a strong IP command over.

A lot of people have compared this move to Zuda but, that was DC people trying to do webcomics, and as far as I can tell — and seemingly confirmed by Webtoon’s CEO —  these Webtoon comics will be created by mobile comic native creators….so you could call that learning from Zuda’s mistakes.

§ If there’s one thing that could break the malaise of this disease-ravaged land, it would be the trailer for Spider-Man: No Way Home. I have a feeling that when this movie hits theaters it will give a sharp rebuttal to the “people don’t want to go to the theater!’ idea. Despite the pleas of a desperate nation, Sony/Disney have been holding off on releasing the trailer…but supposedly only until this week’s CinemaCon, which is taking place in Vegas as a kind of whistling into the wind type thing for theater owners.

But alas, the big debut has been spoiled. Parts of an unfinished version of the trailers appear to have leaked, first on TikTok, as a movie of someone watching it on a phone or something. The quality is terrible, and we won’t describe it, but if you’ve been reading any Alfred Molina interviews, it appears he was a credible source. Sony and Disney tried to take down the video, which confirmed its authenticity

Previous reports indicating that the trailer could end up being released to the public on Monday, August 23rd or Tuesday, August 24th, to coincide with its rumored debut at Las Vegas’ CinemaCon convention. With all of that in mind, it will be interesting to see if and when the trailer does get released officially, especially amid the leak. Prior to the trailer’s debut, the most concrete look at No Way Home thus far has been through Funko POP!s, toys, and other pieces of merchandise — and even then, those figures have only scratched the surface of what is rumored to appear in the film.

And poor Wassila Lmouaci — the leaked trailer was branded with her name, and she is indeed a VFX artist who has worked on Thor: Ragnarok and many other things. We’ll probably never know exactly just what happened here but Kevin Feige probably has something very unusual planned for her.

Trying to make chicken salad out of chicken leaks; Tom Holland Instagrammed a seeming announcement that we will get to see this trailer sooner rather than later. God, I hope so. 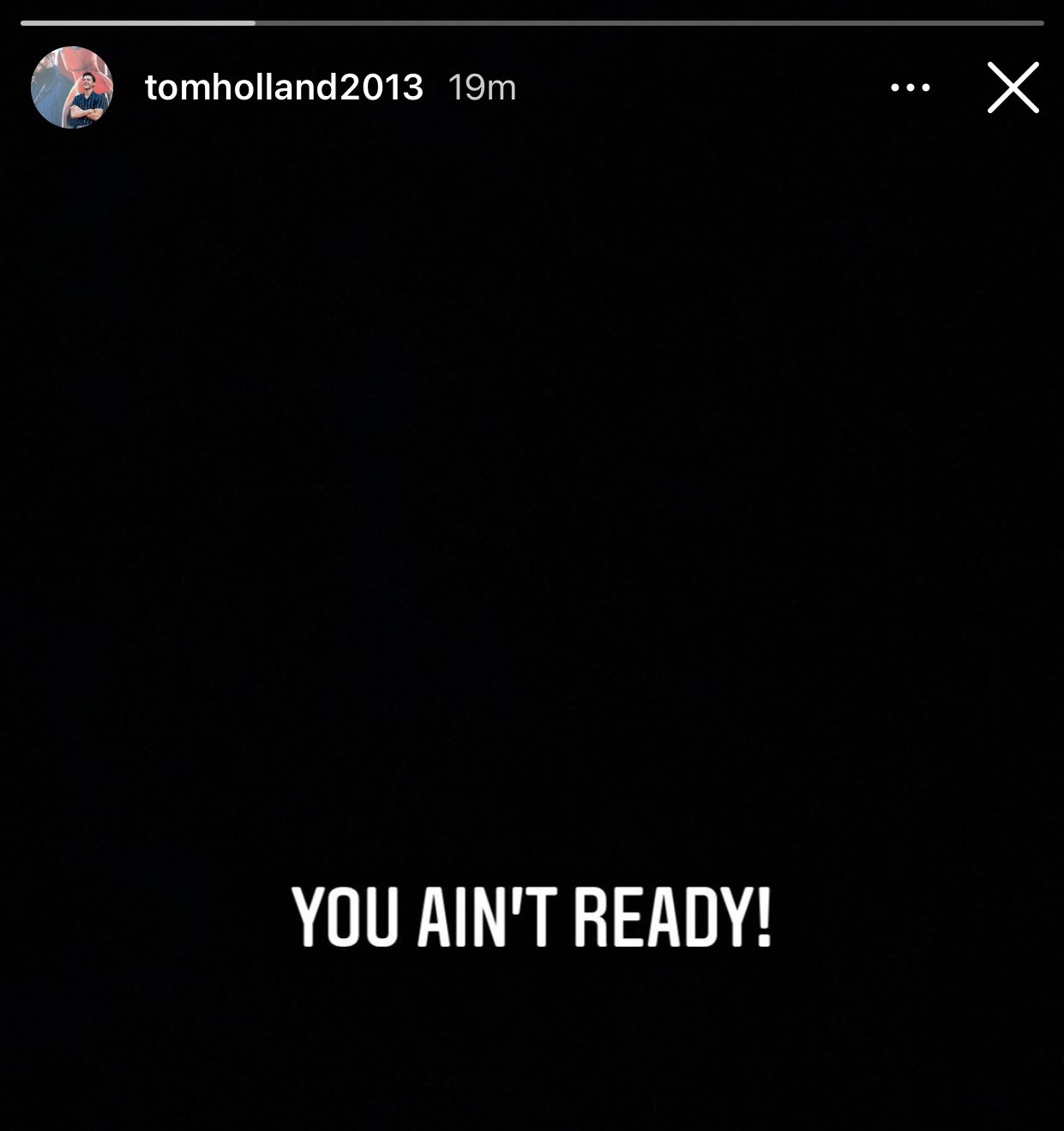 § Chinese film superstar Tony Leung is not doing American press ahead of his role in Shang Chi and the Legend of the Ten Rings, but he did sit down with Elle Singapore, which included many dreamy photos and the shocking realization that this is his first Western movie role.

“When director Destin Daniel Cretton first described the role to me, he said there are many layers to the antagonist role, and hoped that I could come on board,” Leung shares, noting that the partnership with Cretton checks the boxes for the right vibes (they spoke for an hour over a video conference call). “I accepted it because of the director. It just felt right. Plus, this is something I’ve never done before, to play an Asian supervillain. A chance to do something for Asia. I thought, why not?”

C2E2 ’22: The legacy and importance of Wonder Woman

The DCEU is fine, if by fine you mean a flaming...

PREVIEW: Escape the cube in BREAK OUT #3

REVIEW: THE SANDMAN managed to adapt the impossible and bring us into The Dreaming

C2E2 ’22: The legacy and importance of Wonder Woman