Last week’s 2014 edition of the ImageExpo has generated a large amount of coverage for both new title announcements, and for the dearth of diversity among the presented creators. From a practical standpoint, Image Publisher Eric Stephenson and Business Development Head Ron Richards clearly got their money’s worth of publicity from the event, although with attendee ticket prices ranging from $20 to $50 (for “premium” access) a good chunk of the budget was surely covered beforehand. Stephenson admitted that the ImageExpo concept was inspired by what Richards (along with Isotope Comics owner James Sime) had done at the legendary MorrisonCon in September 2012, of an intimate, exclusive, creator-focused gathering of hard-core fans. The keynote portion of the event, though, was an explicit homage to the legendary Steve Jobs/Apple style press events (often held at the same or nearby venues in San Francisco), even if black turtlenecks were sadly lacking.

ImageExpo reminded me, however, of the experience of camping out for the day in one of the one company dedicated mid-size rooms at Comic-Con in San Diego. After the initial announcements and surprises, the bulk of the day was a series of comic creator panels with free-flowing Q and A portions. Of course, unlike at San Diego, attendees of ImageExpo did not have to compete for seats or worry about missing out on all the other amazing events going on at the same time. (They did, however, have to take a day off from work to be there on a Thursday, of course). The only distraction from the mostly entertaining panels were exclusive merchandise for sale and signing events, both of which had pretty long lines but seemed to be moving well and the fans seemed happy with what was offered.

I had been warned by Image PR prior to the Expo that there would be no digital specific announcements, but that turned out to be somewhat incorrect. Stephenson made clear in his keynote that they would continue to sell digital comics DRM-free from the Image website, and would also work with all the other major digital platforms, including comiXology, iBooks, and Google Play. The DRM-free “experiment” of selling digitally unprotected files in a wide variety of formats (including pirate friendly CBR and CBZ, along with more standard EPUB and PDF) has been a qualified “success,” although Stephenson did tell me that they did not have all the numbers in from the other distribution platforms to really compare. He did say they may do another Expo mid-year again when they have all the data. Naturally, the opacity of what happens at comiXology, not to mention Apple and Google, made the ability to experiment with prices and special offers a real “advantage” for Image’s home cooked sales strategy, something that echoes what Dark Horse’s digital policies. Left unmentioned were the problems Image has experienced with Apple over the censorship of its more sexually explicit titles including Saga, Sex and Sex Criminals. 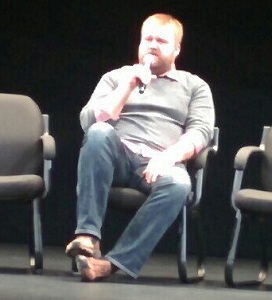 The other digital news from ImageExpo was Robert Kirkman’s digital only title Tech Jacket (written by Joe Keatinge), with three issues made available for what Kirkman called “binge-reading.” Kirkman did later indicate that Tech Jacket would come out in print for those who preferred that option, himself included. More notable, however was Kirkman’s response to an audience question about the ultimate fate of his Marvel title, The Destroyer from 2009. Kirkman was rather unsatisfied by the experience and Marvel’s decision to let the title languish. In his inimitable style,  Kirkman urged his audience to obtain The Destroyer any way possible, including to, “Bittorrent the hell out of that book! It’s from Marvel, I don’t give a f*ck.”

INTERVIEW: BENJAMIN PERCY on bringing werewolves to the pandemic in WEREWORLD

INTERVIEW: Get a behind-the-scenes peek at the production of the Patrick...

BROOKLYN HORROR FEST ‘21: EGO turns COVID into an enabler of...