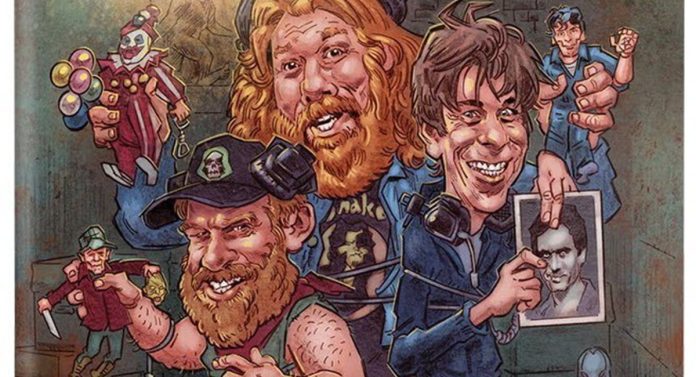 Publisher Z2 Comics and the team behind the hit podcast The Last Podcast on the Left are joining forces for a new series of graphic novels. The Last Comic Book on the Left series will launch with a first volume in Spring 2022. The series will bring the podcast’s blend of horror and humor to comics with an anthology of stories, curated by podcast creators Marcus Parks, Henry Zebrowski, and Ben Kissel, from all-star comics creators including James Tynion IV, Rick Veitch, Eliot Rahal, and many more. The book will also be accompanied by a series of pinup prints of different cryptids, and The Beat is excited to share an exclusive first look at one such pinup, a Bigfoot like you’ve never seen before from artist Noah Van Sciver.

Here’s how Z2 Comics describes The Last Comic Book on the Left Volume 1:

RISE FROM YOUR GRAVES! Not a joke, not a gag; like a necromancer, The Last Podcast on The Left is reviving the tradition of the humor comic magazine, this time as a series of graphic novels. Inside you will see stories edited and curated by your Last Podcast Hosts made to entrance the eyes and titillate the senses.

WITNESS: The descendent of Albert Fish!

GET AROUSED BY: Very Sexy Mothman!

A mix of Comedy and Horror created by some of the best comic writers, artists, and warlocks in this dimension. Once read The Last Comic Book on The Left will change your life maybe for the better.

DISCLAIMER: The Last Comic Book on The Left has not been funded by an underground satanic cult. All Cryptid portrayals have come with the explicit permission of The Mothman, Sasquatch and Jersey Devil estates. By buying, reading or even looking at this book, you are consigning your soul, spirit or any eternal animating entity to the creators of this book, which again is not funded by a satanic cult.

The first volume of The Last Comic Book on the Left will feature stories by the aforementioned Tynion IV, Veitch, and Rahal, along with Bob Fingerman, Tyler Boss, Ryan Cady, Morgan Beem, and Logan Faerber. Noah Van Sciver will also provided a story along with his Sexy Bigfoot pinup print, with other prints illustrated by Faerber, Ian McGinty, Sean Von Gorman, Jenna Cha, Norzine, Martin Morazzo, and Courtney Menard.

In a statement announcing the project, Last Podcast on the Left‘s Zebrowski joined Z2 publisher Josh Frankel in expressing their excitement over the new anthology series:

“We are excited to expand our comic bloodlust with Z2 and The Last Comic On the Left,” Henry Zebrowski notes. “We get to see many of our more ‘colorful’ ideas receive the evil MAD Magazine treatment. Z2 works with some of the most talented artists and creators in the comic business and it’s a privilege to be in their talented hands.”

“When I first got turned onto The Last Podcast On The Left a couple years ago, I was immediately hooked. As a lifelong weirdo with an obsession for crime, paranormal, and the occult, I learned to stifle talking about it in mixed company—listening to this podcast about the strange was an instant release valve,” Z2 Comics Publisher Josh Frankel explains. “To be able to work with the guys to bring their comedic vision to life, as well as to do so in a format that pays homage to some of the greatest publications of all time, is insane to me.”

As with most Z2 Comics releases, The Last Comic Book on the Left Volume 1 will be available in a number of formats. Along with standard softcover and hardcover editions, both of which include a print of McGinty’s Detective Popcorn pin-up, a deluxe edition will include an oversized edition of the hardcover with cover art by Eric Powell, and a set of prints featuring Morazzo, Van Sciver, Cha, and Von Gorman’s pinup art. The Super-Deluxe Edition comes signed by the podcast hosts, and includes everything in the Deluxe Edition plus additional posters with artwork by Norzine, Faerber, and Menard.

The Last Comic Book on the Left Volume 1 is available for pre-order now, with an expected release date of May 2022. 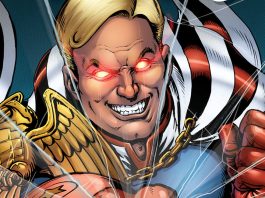 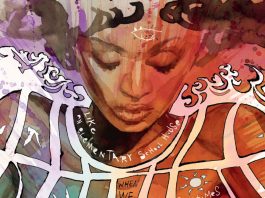 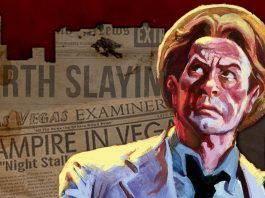