Diamond has just released charts for books on sales in September and comics sales were led by an old favorite — Charles Soule and Luke Ross’ Star Wars: War of the Bounty Hunters #4 — in the last month when Marvel comics will appear on the charts as a Diamond premiere publisher.

The best selling graphic novel was Tony Fleecs and Trish Forstner’s surprise hit Stray Dogs, which has been selling out since it came out in February. No more second printings, everyone!

The departing Marvel Comics had 8 of the top ten periodicals but only 5 of the top ten GNs. IDW charted at #7 with Teenage Mutant Ninja Turtles: The Last Ronin #4, the penultimate chapter of Kevin Eastman’s future Turtles tale, and Image Comics’ Primordial #1, by Jeff Lemire and Andrea Sorrentino came in at #10.

Among the premier publishers, Masters of the Universe: Revelation #3, a prequel to the Netflix animated series, was Dark Horse Comics’ top book for the month at #27; BOOM! Studios’ Something Is Killing the Children #20 ranked #28; and Dynamite Entertainment’s Army of Darkness: 1979 #1 was their best-selling book at #58..

As for GNs, Spider-Man by Todd McFarlane Omnibus came in at #2 and Kouhei Horikoshi’s My Hero Academia #29, was #4.

Comichron’s John Jackson Miller is out and about but he tweeted a few facts about this month’s numbers:

September charts! Diamond had a strong month, with Marvel taking the top 5 slots in its comics chart in what was that publisher’s final month of exclusive distribution there. WAR OF THE BOUNTY HUNTERS #4 led a month in which we project the top 400 comics sold 6.6 million copies. 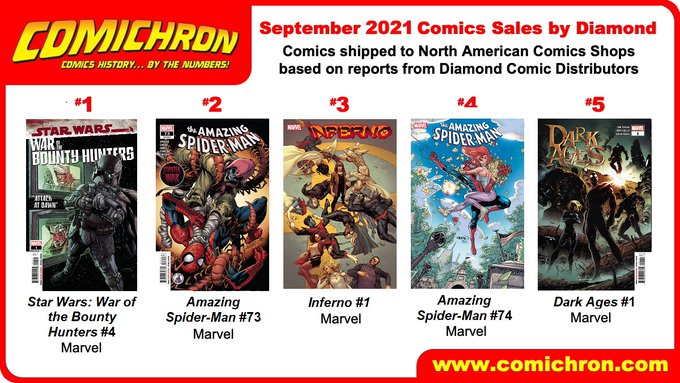 AMAZING SPIDER-MAN #74 was the top dollar book, given its $9.99 price tag. Dollar sales for the top 400 comics were close to $30 million. It was a five-week month for Diamond, and sales were comparable to the last such month, the very good June. June: http://bit.ly/Jun21Comics

Image had the top graphic novel with STRAY DOGS Vol. 1, which appears to have had a huge sale near 15,000 copies. The McFarlane and Fantastic Four Omnibuses also look close to 10k, record strength for that format. The top 400 GNs would add another $11 million to Diamond’s total.

Again, this was the last month for Diamond’s exclusive distributorship of Marvel, which began in April 1997 (which we reported at the time here): https://comichron.com/monthlycomicssales/1997/1997-04.html… Marvel will be in Diamond’s future charts, but as books Diamond purchased first from Penguin Random House.

The Harvey Awards announces its 2022 Hall of Fame inductees

A Year of Free Comics: OLIVE & POPEYE is available on...

PREVIEW: Solve the riddle of the Mentok in HIGHBALL #2

Velma gets a new girlfriend in latest SCOOBY-DOO Halloween special