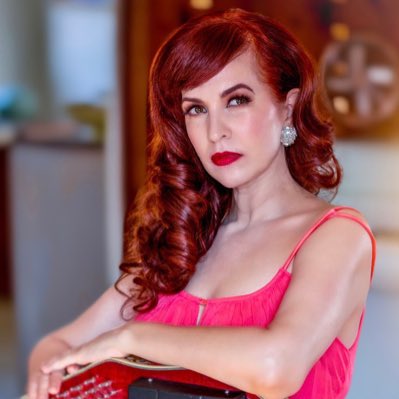 Consummate voice actress Grey Griffin has been on a roll for the past year appearing in a number of high-profile projects for the past year including the Invincible animated series as well as providing voiceover for the commercial narration in the fifth episode of the acclaimed WandaVision Disney+ original series. Not slowing down anytime soon, Griffin’s vocal stylings can be heard as the warrior Kitana in Mortal Kombat Legends: Battle of the Realms, the sequel to last year’s Mortal Kombat Legends: Scorpion’s Revenge where she first played the role.

If you’ve ever taken a gander at the Griffin’s Twitter, you know how entertaining she can be on social media. So interviewing her about voicing Kitana was just as lively and as you would expect. During our conversation, Griffin divulged the details of how her pregnancy with her second child prevented her from performing Kitana in the Mortal Kombat X video games. Plus the prolific voice actress discussed getting through the pandemic as a working single mother.

Taimur Dar: This isn’t your first time voicing Kitana in Mortal Kombat. I know you voiced Kitana’s fighting vocals in the Mortal Kombat X video game but weren’t able to provide the dialogue due to your pregnancy.

Grey Griffin: I did the entire game before my pregnancy became complicated. And then I was in the hospital on bed rest. They called me and said, “We need you to come back and redo a few little lines here. We’re changing some things.” I said, “I can’t! I’m in a hospital bed. I can’t come back and redo anything for you!” So they said, “Ugh. Sorry, Grey, we’re going to have to recast.” And I was like, “Oh no!” I was so heartbroken. But I love Karen Strassman and she came and did it. But they said, “Grey, we have good news! We left in all your fighting sounds!” So it’s Karen doing lines and me doing the fighting sounds so I was grateful to keep any little shred of that part. I was happy to come back for the movie.

The lovely Karen Strassman had to take over the story lines when I had my baby…but the ass-kicking is ALL ME! #MortalKombatX

Dar: Obviously voice director Wes Gleason and the filmmakers have worked with you before and know your talent. I’m curious if they knew the story of how your pregnancy prevented you from providing the dialogue for Kitana and if they thought casting you would be a great way to fulfill that missed opportunity?

Griffin: I’m not really sure! That would have been really nice if they did do that. I’ve been working with Wes for years. He directed me on Unikitty and several Scooby projects. We know each other quite well. I think Wes just brought me in on this. I’m not sure if I auditioned. He may have brought me in because he knew I could play a few different characters for the same price point. [Laughs]. I’m not sure if he knew about my saga with the pregnancy. But I was very happy to have a chance to come back and prove my “Kitana-ness.” I filled them in after [I did the first movie]. But it was only a few lines and they were like, “But next movie you’ll have a much bigger part!” [Laughs]. It was exciting to come back and do this meatier role in the second film.

Dar: I have a passing familiarity of Mortal Kombat but I’m not a huge video game play and I’m not a diehard fan of the franchise. It had me thinking about shows like Ted Lasso. I have absolutely no interest in soccer or sports but I adore the series. How do you connect to your character as a performer?

Griffin: I don’t know anything about video games either. I have never played this game or a video game since I was a little kid. I’m just not a video game person. All I do is connect to the story and the relationships. I thought of Kitana as this woman who’s been through so much and been deceived over and over. But she still has a trusting nature and has a good kernel inside. Even though she’s a general and not a colonel. A little wordplay there. [Laughs]. I feel like her morality is strong and she does the right thing even though it means going against the powers that be. She’s been on such a journey thinking that her father was Shao Khan and then finding out that it’s not true. And she’s got a sort of love relationship going. I took it all for the relationships and not the battles. I just don’t connect with that at all because I don’t know that much about video games. [Laughs].

Dar: Switching gears, about a year ago you appeared on a podcast to discuss the challenges you were going through during the pandemic. You related a story about how you broke down in the middle of a remote voice recording session. It actually really helped me a lot at that specific point in time to hear that I wasn’t the only one struggling.

Griffin: Oh, thank you! I am a single working mother. It’s a hard balancing act. I’ve got other sessions and my kids start school. I’m still worried [because] they’re too young to be vaccinated. It’s so stressful. We’ve been through so much as a nation and as a world. I did have a breakdown. I’ve learned that people just want you to be human. You don’t have to be strong all the time. Actually showing your vulnerability helps people. What you just said, people said.

I was doing a session and there was a technical difficulty. I was trying to get my kids on online learning and fix food. It was just a crazy morning. I got onto the session finally even though they were like, “What happened? You’re late.” And I was like, “I know! I couldn’t get the thing to work!” And then I just started sobbing and I was like, “I can’t do this! I can’t do this!” If you’ve known me in the “before time” I was just the most non-technical person. I couldn’t even do my own auditions. I would go into a studio and pay $20 just to send an audition when all my friends were at home already sending their own auditions. I didn’t even own a computer before all this happened.

Griffin: No! It’s been a real big learning curve. I cried and I didn’t realize how many people were on the call. Probably around 15 people reached out and said, “Grey, you couldn’t see us but we were on the Zoom. We just love you and hope you know that we’re there for you. It actually made us feel better about our situation too.” On the one hand, I was totally embarrassed because so many people saw me break down. But on the other hand, it was sweet that it encouraged others to think about how they’re not alone. I’m always happy when someone’s kid walks into the Zoom call. We’re all human. We’re all just doing our best. [Laughs].

Dar: Continuing off of that, I know that although studios are open again and voice recording can be done in-person, actors are still choosing to do record remotely at home. You mentioned how concerned you are for your kids, so are you still doing your voice recording remotely from home?

Griffin: I am home. I don’t even go anywhere. I did have a time when I traveled a bit when it seemed like we were out of the woods. Now things are bad again and I’m back to lockdown. I’m even afraid to send my kids to school. I’m hoping they stay safe. But I don’t even go to studios. Occasionally if there’s a song or something and I cannot technically do it from my garage, I’ll go in. But there have to be crazy strict safety protocols because I’m terrified of getting my children sick. Their dad lives in Nashville and usually, he visits once a month. So they haven’t seen their dad in a while because it’s just not safe. Hopefully, by the holidays they’ll have a vaccine for them.