Just like every delicious Cow Pie you’ve ever had the pleasure to eat, The Dandy is now reaching an end. One of Britain’s longest-running publications, the comic was released regularly for the past 75 years, coming out almost every week during that time. For context, only two other comics pre-date it, one of them being Detective Comics. That’s quite the run. Even during the War, it continued on proudly – paper may have been rationed, but the public needed their constant fix of prank falls and good fun.

Although the series will now be going digital, this does see an end to one of our proudest British childhood traditions: going down the shops every week to see if there’s a better toy attached to the Beano or the Dandy. This would then dictate whether you spent the next day talking about Roger The Dodger or Beryl The Peril (who, sidenote, were TOTALLY into each other).

I used to get The Dandy when t’were but a boy, after watching the incredible TV series Bananaman on CBBC. In fact, I think Bananaman may have been my introduction into superhero comics as a whole – ever since a child I’ve been valiantly searching for a new superhero who could ever match his grace and poise. A boy called Eric Wimp, who turns into a superhero every time he eats a Banana? AMAZING. Wolverine can go suck it, Bananaman is where it’s at. 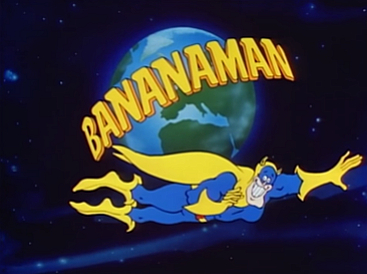 Founded in 1937 by Scottish company D.C. Thompson & Co., The Dandy managed to maintain a traditional sense of humour and fun which has been all-but wiped out everywhere else you look. While Marvel and DC continue to pitch murderous ‘all-ages’ books at children (go find a single Batman story in the New 52 I can show a five-year old), The Dandy valiantly continued to bring silliness for kids every week, without fail. Custard pies and puns were the order of the day here, rather than constant reminders of death and miserable superheroes.

It was a comic my grandpa read, my dad read (although he also liked Topper, to his eternal shame), and I read. Although it remained defiantly in the 60s for the whole of its run, the timelessness of the style spoke to generation after generation. And one of the most interesting aspects of the comic was that it shared a Universe with all the other children’s comics released around the same time – The Beano, of course, but also Beezer, Topper, Nutty and Hoot.

Every so often, an anthology comic or annual would be released which had all the popular characters appear together, and interact. These were AMAZINGLY good fun, and surely formed part of the blueprint for how Marvel, DC and especially Valiant started to structure their own comics. When the various other weekly comics started to go out of print in the UK, The Dandy would adopt them. There was no sense of rivalry between the different comics – they coexisted, at least in my childhood eyes, pretty happily. There were plenty of kids out there, after all, no need to fight over them.

There have been some dark times for the comic recently, however, with a relaunch as ‘Dandy Xtreme’ being perhaps the nadir for the book. Amid fan outcry, this new direction lasted all of a year before the Xtreme got excised and fan-favourite character Desperate Dan was allowed back on the front cover. From then on, the comic largely cut back on using the characters it owned, in favour of parody or licensed properties. Now forced to compete with TV instead of work alongside it, The Dandy struggled to match its traditionalist ideals of clean humour and mischief with an audience who were playing Halo as soon as they developed motor function. A disconnect had grown.

And, earlier this month, came the news that, sadly, the market had shrunk to a point where the comic could no longer stand in print. With sales spiralled down to around 8000 copies a week, The Dandy will formally close the doors to Dandytown in December, before reopening them for digital-only comics. Perhaps this will reinvent the publication, as Charlie Brooker suggests. Then again, he’s never exactly been the target audience for comics like this. While some people enjoyed the simple, non-cruel, slapstick humour in the stories, many others have often called the publication old-fashioned and staid.

Yet to me, that was always completely the point of The Dandy. The Famous Five will never stop drinking ginger beer and going on ill-advised trips to Wales, and Desperate Dan will always eat Cow Pies and have the world’s manliest stubble. Even while society has grown and built and changed, The Dandy was an unchanging reminder that I could still enjoy something that my grandpa had liked before me.

The Beano and 2000AD now stand as the two remaining big weekly comics available in Britain, although there are still plenty of new publications like The Phoenix coming in to stand beside them. Perhaps digital will be a shot in the arm for The Dandy – but it does mean that, from now on, there is nowhere left for kids to get hold of cheap plastic peashooters.

And that could be the saddest news of all.

INTERVIEW: How the filmmakers of LEGION OF SUPER-HEROES animated movie tackled decades of comics continuity