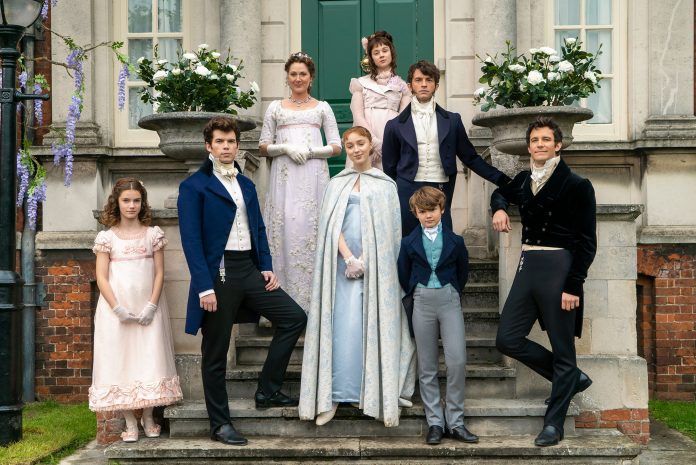 As a long time lover of romance novels, with specific love given to Regency era romance, when Julia Quinn‘s Bridgerton series was announced as a project for Netflix, I was very excited. But for many jumping into this Shondaland produced series, they will be entering the world of romance novels for the first time. Perhaps you’ve walked past the romance section in a book store, or thumbed through a paperback in passing, but walking into Bridgerton as one of the uninitiated might leave you a bit surprised.

Although on the surface, Bridgerton might remind you of Pride & Prejudice or Mansfield Park, regency romance novels actually find their inspiration from Georgette Heyer, who was inspired by Austen. With the times and audiences changing, Heyer’s novels, which have more focus on the rapport between two romantic leads with a heavier focus on historical accuracy, are not anything close to the raunchy anachronisms of Bridgerton. And let me tell you, comparatively, Quinn’s novels are actually not as heavy on the love scenes as others.

As with genre fiction, most modern regency romance novels tend to tick these boxes. The story typically centers around two people – almost always a man and a woman, one or both of them are titled as in they are lords and ladies of the ton, the book is set in the British Regency era 1800’s (or sometimes pushing into early 1900s), the male character is most likely a rake, more on this later, and after some hijinks and some sex, there is a happily ever after. This is more or less the case for all of the books in the Bridgerton series.

Now, you maybe be wondering looking at the title of this article, this is based on eight books? Yes. Though, as is the style of romance novels, each of these books can be read alone. Though, because the Bridgertons are a close-knit family, their stories will naturally bleed into one another. One family member runs away, the rest of them follow, one of them gets into scandal, the rest of them come to save them. What Bridgerton does well is set up many of these future romantic stories, though they do it in their own Shondaland twisty way. This is characteristic of any romance novel series. You start reading one, you fall in love with the characters, and soon you’re trying to figure out when you’ll get the book where Penelope gets her happy ending. Honestly, it’s also a fantastic marketing scheme.

These stories are typically set in the ton. While I did, shamefully, once think this was a mispronunciation of the word town, it is actually the word typically used to refer to high society in London. Starting from the month of March and ending in September, the members of the ton fill their London homes and have parties, debut their daughters, arrange marriages, and generally live the high life. These were the ultra-rich, the ultra-powerful, and the ultra-privileged — with a moniker that means “good manners”: le bon ton. The majority of the people in this part of the social hierarchy are peers, therefore titled with lands and ranks. This is why Simon Basset (Regé-Jean Page) is also called the Duke of Hastings. It is also typical for people to simply call him by his title, Hastings.

Titled men, who live with the world on a silver platter, are therefore likely to spend their youth as rakes. What is a rake? Yes, it is a tool you use to landscape. But it is also short for rakehell. In the popular vernacular, you might say they’re a fuckboy. A rake gambles, has copious amounts of sex with widows and opera singers, drinks, and does other sinful things that might land his family into debt. In The Duke and I, the first novel of the Bridgerton series and the book that season one is based on, Simon Basset, Anthony Bridgerton (Jonathan Bailey), Benedict Bridgerton (Luke Thompson), and Colin Bridgerton (Luke Newton) are all rakes. They indulge in society and sow their wild oats before it’s eventually time for them to “perform their duty” aka get married to someone who is much younger than them and pop out a couple of heirs to continue the family line.

And here is where Daphne Bridgerton (Phoeby Dynevor) comes in. As the fourth the family — you’ll always know which Bridgerton you’re talking to because they named their kids alphabetically — Daphne is much younger than Anthony and Benedict, but because she is a woman, she is debuted into society and thrown into the marriage market. While there are some major differences between book Daphne’s debut and show Daphne, the timing is the same. It’s expected that Colin (basically her Irish twin) will have many more years of freedom before he must settle down.

After events that leave Daphne without any suitors, she and Simon, also her brother’s best friend, become conspirators in a scheme. They will attend balls together and be seen together. Simon will be able to avoid ambitious mothers trying to marry their daughters to a prestigious duke, and Daphne will seem that much more unattainable and therefore attract more suitors. Dramatic situations occur, honors are almost besmirched, but ultimately the couple who were just faking it for the ton fall in love with one another and are married. Even Simon’s fierce determination not to have children mismatched with Daphne’s deep desire to become a mother eventually finds a happy conclusion. It is worth noting though, for those of you who have read The Duke and I, how they explore That Scene is done far better than it is in the book. Sometimes adaptations really change things for the better.

Speaking of adaptations and changes, shall we look at a few made in order to create Bridgerton? The first most obvious change is the race of a couple of the main characters. Though, frankly, the cast is still pretty white. The amazing Adjoa Andoh plays the much-beloved (by fans) and much-feared (by rakes) Lady Danbury and plays her perfectly. Danbury is a staple of the Bridgerton novels and someone who almost acts like a stern fairy godmother to the wallflowers and the hopeless romantics. Golda Rosheuvel plays the haughty and gossip-loving Queen Charlotte, who plays a larger role than I expected in this. Of course, Regé-Jean Page dazzles as Simon Basset, he truly embodies the cold and brooding Duke of Hastings from raised eyebrow to leather riding boot. Martins Imhangbe and Ruby Barker also have more substantial speaking roles, but on the whole, this is it. And while Page and Andoh are perfectly cast, I wish there was more. The subject of race in the ton is touched upon but only barely. It is one of the weaker aspects of the series.

Similarly, the same thing can be said for queer representation. There is a brief mention of a gay relationship among tertiary supporting characters and a split second romantic scene, but that is it. The gay character laments that he is in a marriage of convenience with his wife, but in love with another man. However, it is played more like a carpe diem lesson than it is about discovering your sexuality and perhaps realizing you are not heterosexual. The particular Bridgerton he is advising will likely have a heteroromantic storyline should we ever get to their story. It is actually pretty disappointing since up until this moment I was hoping for this character’s story to change dramatically and perhaps we’d see a queer Bridgerton.

But it’s not all like this. Bridgerton shines in its portrayal of female relationships and creating strong female characters who can exist even in a very traditionally feminine environment. I tend to abhor the phrase “strong female character” because it typically describes one specific type of character, a physically strong, ass-kicking female character. But women can be strong of mind and heart without needing physical strength. Daphne, Lady Danbury, Eloise Bridgerton (Claudia Jessie), Penelope Bridgerton (Nicola Coughlan), Lady Violet Bridgerton (Ruth Gemmell), Marina Thompson (Ruby Barker), and even Lady Portia Featherington (Polly Walker) have their own individual brands of strength. These are not characters who all blend together into one. Indeed, in a media landscape that typically shortchanges female character development, each woman is very distinct. They have their own wishes, their own desires, fears, and motivations.

As far as adaptations go, this one is loyal to the source material but not religiously so. There are some things I wish I’d seen more, particularly in regards to Daphne and Simon’s personal characteristics. Anthony’s character also does some questionable things that feel very out of character for the Viscount of the books. I’d also never thought I’d say this, but maybe fewer sex scenes? Written in prose, love scenes can be emotional and heartfelt and just hot, but watching it on screen, some things can be lost in translation. But if this is your first step into the regency romance world and you’re intrigued or just curious, this might have been a surprise. Yes, we are a far cry from Darcy touching Lizzie’s hand while helping her into a carriage. But, if you have read all of the Bridgerton novels and the additional eight post-epilogue vignettes, you might be able to string together characters that we’ll see in potential future episodes. Some of them are more overt, but one actually had me gasping toward the end.

Bridgerton is horny and dramatic and full of tropes, and honestly, there’s nothing wrong with that. The characters are over the top in a society that is both ridiculously indulgent and restrictive. On the production front, the set design and costuming is fantastic. I love finally seeing the Featheringtons in their horrendously colored dresses or the queen in her extravagant wigs. The sweeping scene of the prestigious ton balls are scored not only by classical music but also Vitamin String Quartet renditions of contemporary pop songs like Ariana Grande‘s “Thank U, Next” and Maroon 5‘s “Girls Like You”. With the plot twist reveal that caps off the end of the season, romance lovers (maybe not of all ages) will love this little Christmas gift from Netflix. Perhaps with the success of Bridgerton, we will see more historical romances grace our screens. 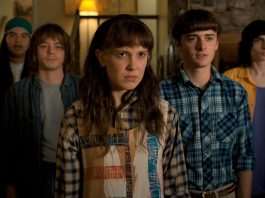 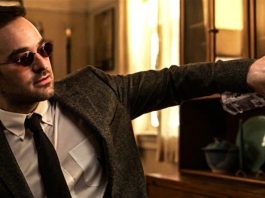 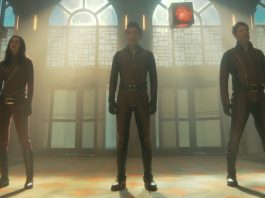