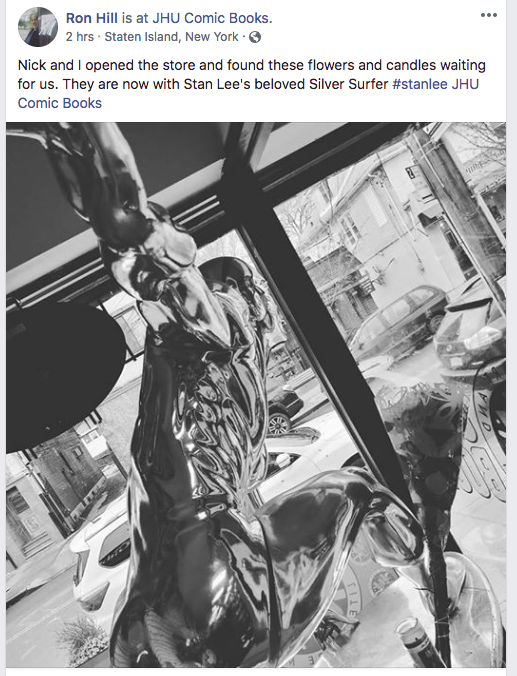 Stan Lee has left us, at least in his corporeal form. I’m sure somewhere in the countless pages he penned there’s a Stanism about leaving earth but living on as a powerful spirit. Watching the outpouring of mourning from every level of fandom, entertainment and the world, and the hundreds of photos – making him surely one of the world’s most photographed humans – I realized that Stan is like Elvis, Marilyn, Prince. Not only is one name sufficient to identify him, but the spiritual and ritual nature of the memories place him in the ranks of what one religion might call “saints” – a supernatural being whose mere presence confers blessings and joy.

Which Stan would have loved, and his detractors hated.

So before I get going, the first memorial I’ve heard of as this Friday at the Golden Apple on Melrose in Hollywood. From their email newsletter:

So in light of Stan’s passing today, we are opening our shop to ALL fans and colleagues to our event on Friday from 6-9pm. Come and listen or share stories about Stan and join us in a toast him, his legacy and his timeless characters.

The first of many, I’m sure.

It does seem odd to be sad about the passing of a 95-year-old man who was clearly ready to move on, and had lived life to its fullest. But it can’t help but be sorrowful. Setting aside all the Stan the egomaniac talk, it’s indisputable that meeting him brought joy to many people. And Stan was great at it. He loved getting adulation and being Stan and firing off quips. He was a spirit that the rules of nature didn’t seem to apply to. His generally hale demeanor at an age where most are confined to scooters and gruel was truly superhuman.

I remember seeing Stan at the Harvey Awards in 2011, at age 88. He was frail and stooped, but moved with the ease and speed of a man 1/3rd his age. Stan’s eyesight and hearing were shot, but he carried on. I interviewed him around the same time, and although he would often steer the conversation to a familiar pattern, he was funny, alert and unmistakably Stan.

“Every exchange, even on mundane subjects like typos, left me with the feeling that I’d just had a thrilling adventure.”

That was truly Stan’s gift, to make life more than the mundane in every moment. It’s what fueled his gift for writing superheroes, and enabled him to stay relevant so long, even to little kids.

In his later years, Stan joined Twitter, back when it was fun, and it was obviously him, writing nonsense about staying at home with his beloved Joanie. He followed my own twitter account – whether it was him or some handler I’ll never know – but of course Fangirl Heidi was thrilled. When the con men who took over his life scrubbed the whole Twitteraccount, I was swiftly unfollowed and replaced by Kim Kardassian or some other celeb.

On the subject of Stan and Kirby and Ditko…that battle will rage for a long time – but it’s not even really necessary to wonder wha the battle lines are. Ditko and Kirby wrote SCORES OF COMICS. You can easily see the differences from those and what they did with Stan and judge for yourself whether Stan had no claim. I don’t think there’s much question. Stan had the gift of writing melodrama that was exciting, not just cliched. Just how shitty he was to others will be left for other to talk about in the years to come.

Stan’s passing from the corporeal world has survived TWO news cycles, unheard of  in today’s hellscape, and cementing his greatness and cultural weight. Here’s some of the Best Stan Takes – all written by men, one notes. Are there no FEMALE COMICS PUNDITS? I hope Laura Hudson gets to weigh in some time.

These are my own idiosyncratic links, some social media posts that show a Stan we didn’t see, a few filled with rage. You don’t live 95 years without doing a hell of a lot, and Stan did it all.

And to sum it all up: STAN LEE SURE LIKED THAT GREEN SWEATER.

Bendis has an obviously planned remembrance, but it’s a nice comic, and frank about Stan’s later years.

Stan Lee, in most cases, came up with the bold strokes. He would invite an artist into his office and proceed to act out the story, hurling his body through the action. He would leave them to design the costumes, and backgrounds and panel-by-panel breakdowns. When they were done, he would take a look at what they had drawn (which, if the artist was Kirby or Ditko, often differed greatly from the outline Lee had provided) and fill in the dialogue.

He urged them to go bigger, in every panel. Why have characters talk when they could shout? Frown when they could cry? Argue when they could brawl? No story, no page, no panel would be wasted on the inessential, the mundane. He told his artists to infuse the stories with big emotions, with metaphors the size of giants who could eat planets. Timely/Marvel’s competitors at DC Comics had their own superheroes, of course, but they were given to sitting around conference tables and cooperating with one another. As a result, their stories felt staid, tidy. Small.

Douglas Wolk in Vanity Fair with a more wide-ranging assessment;

But of all the characters with whom Lee is associated, his greatest—and the only one he created entirely on his own—was “Stan Lee”: an egomaniac who thought it was funny to pretend he was an egomaniac, a carnival barker who actually does have something great behind the curtain. Artist John Romita, who worked with Lee on Daredevil and Spider-Man, put it nicely in a 1998 interview: “He’s a con man, but he did deliver.”

And Tom Spurgeon with an amazing summation:

Of all the things I read , this twitter thread by Moisés Chiullán is perhaps the most touching. It paints the picture of how Stan survived all those cons at his advanced age. it was easy to see that this is what he lived for, but it was not, of course, as easy as he made it look.

I’m glad that I got to meet and work with Stan Lee over the last few years. I did my best to focus on making our time on various stages together as comfortable for him as possible, focusing on things I knew he liked talking about, especially (before her passing) his dear Joanie.

Amy Weingartner, formerly an editor at Marvel, has an anecdote that captures both Stan’s editorial eye – everyone says that this was no act but a true gift – and his need to get his name everywhere.

Now for the other side, long time Kirby inker Mike Royer has some salty words:

An FB friend who I shall not name points out that both Ditko and Stan died essentially in similar ways. Not quite alone, but pretty alone. Stan had a somewhat problematic family and no one who really cared for him at the end; Ditko’s family was a lot closer than many have suggested.

Finally, in many many obituaries, it’s been noted that Stan turned to comics and changed his name because he was hoping to write The Great American Novel and didn’t want to sully his name with the comics connection. If Stan’s life was anything, it was a living timeline of the acceptance of comics as an art, a change that Stan’s ambassador role very much helped. And there is more to come. Stan has a novel coming out next year (co-written by  Kat Rosenfield.) It’s called A Trick of Light and it will be Lee’s first novel.

PS: I wrote the above for this week’s Beat newsletter, but I didn’t get to write about this:

When I started writing the beat back in 2002, Stan Lee was an endless source of news fodder. His lawsuits against Marvel; the bizarre story of Stan Lee Media and renegade financier Peter Paul; the many many pacts of Stan.

Stan’s triumph in co-creating the Marvel U and his triumph as a movie star and the greatest draw comic cons will ever know bookend a strange period of his long life. All of these deals, and attempts to get Marvel movies made…the shell companies and the streaming content. The terrible Marvel movies and TV shows of the Stan in Hollywood era. It must have frustrated him a lot in the early days, and the immense success of the MCU – and Stan’s lovable cameos in it – must have been the ultimate vindication.

And in case I didn’t make it clear enough: I will miss Stan.

Heroes of X: Revisiting HOXPOX and Queerly Examining the Past, Present, and Future of the X-Men