Last week’s episode took the whole season of The Flash to a new level: Godspeed and his unknown quest in the Arrowverse. But sit tight, this week’s episode kicked everything into overdrive! It was quite strange that Iris was missing throughout the last time we met Team Flash but to have her missing in this episode as well? Before you go throw a fit with Barry talking to an unsettling Iris upstairs in the loft, which quite frankly seemed awkward at first, it’s made up for and explained towards the end.

Barry meets Nora in his dreams again, but this time she comes with a cry for help. With the Godspeed clones running around Central City, Barry is afraid it has something to do with Nora in the year 2049, the year both of them come from. No matter how much he tries to fight the idea of running ahead in time to check up on her, the thought never leaves him. Also in the previous episode, Joe and Kramer narrowly escape Adam Creyke’s (Julian Black Antelope) explosive attack on their car. Joe tries to prevent her from confronting Adam, but all she wanted to do more than bringing his actions to justice is to reunite with her ‘brother’ and understand what actually happened.

Back at S.T.A.R. Labs, Caitlin saves Ultraviolet’s life with a successful surgery and a replacement for her voice box. Despite having another shot at life, she chooses to go back into the game and bring down doctors like those responsible for her current state. She begs Allegra to join her on this manhunt, to choose family over Team Flash. After a lot of thought, Allegra finally goes back to her but she’s a tad bit late. Allegra finds her dead at a Black Hole lab with countless other corpses. We don’t know what actually went down but it’s definite that we won’t be seeing Ultraviolet anymore.

Make way for this season’s guest appearance from A.R.G.U.S: John Diggle/Spartan is back! On getting Cisco’s S.O.S. message about the attacks on Central City, John volunteered to come down for a visit with cutting-edge tech from Star City, one enough to capture a Godspeed clone, and you guessed it right: he’s the prisoner of this civil war. In a classic chase through the city, the team succeeds in fooling one of the clones into thinking he’s a Godspeed clone and freeze him in time using Cisco’s tech. Does anybody else miss him geeking out or is it just me?

It’s too late until the team realizes Godspeed is not like any other speedster or meta, he was injected with the speed serum so the S.T.A.R. Labs meta cell is nothing but a box for him. Instead of escaping the cell, Godspeed hangs around to offer The Flash a deal, to bring down the original Godspeed a.k.a. August Heart so his clones can survive. Now everything makes sense: the O.G. Godspeed made clones to soak up all the energy from the Speed Force and wanted to dispose of them once the task was over.

Some clones realized they were worth more than that and retaliated, which explains why a set of clones saved The Flash in the previous episodes. The same clone is now in the Labs interrogating The Flash about his alliance. Once he refused to form an alliance with Godspeed to kill August in this timeline, he flees. So Cecile and John start their own manhunt for August in the city. Using Nora’s notes, they actually find him, but with his entire memory wiped clean somehow. Caitlin administers a dark matter serum to revive his memory but the only thing they could get out of him is that he’s the O.G. August a.k.a. Godspeed himself.

While the team finds August, The Flash runs forward in time to check up on Nora. As he’s running, he gets blocked by a set of Godspeed clones inside the speed force and gets thrown into a random year with Deon helping him get up. As shocked as seeing him there, it was even more shocking to see Iris with him. There’s something going on with John in the current timeline, a series of headaches of sorts, that Iris is suffering with too. Deon brings his ‘mom’ to keep her safe in this time and Barry agrees to leave her there as he runs back to the current time.

In other news, Adam catches up with Joe and Kramer but these two outsmart him. He reveals Kramer is actually dead and this Kramer is somebody else. Nothing else is explained but now we know Adam is cuffed and will probably face trial for killing his teammates for money. When Barry returns to the current timeline, Nora visits him IRL this time and not his dreams.

And the best news ever? Hello Bart Allen! Okay, this season is finally running the way it’s supposed to.

Watch The Flash Season 7 Tuesdays on The CW. 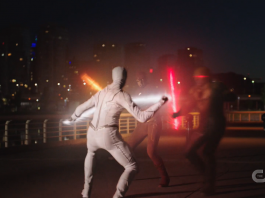 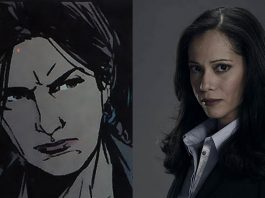 The CW’s BATWOMAN adds Victoria Cartagena as Renee Montoya to its... 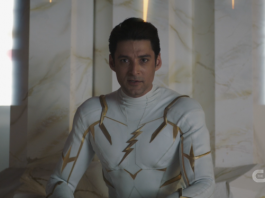