Home Reviews Misfits – (Free) TV You Should Be Watching Online

Ever heard of a UK import called “Misfits?” 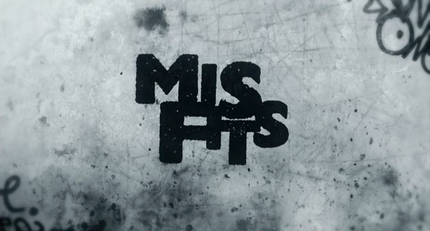 I’ve heard it described as “Heroes, but better.”  Actually, I’d say closer to a mash-up of Heroes, Smallville and the Nathan Barley/Snuffbox school of very dark British humor.  And yes, it is better than Heroes.  Especially Heroes after the first season.

The premise starts with the “mysterious empowering event.”  In this case, there’s a storm and some hail (evoking a Smallville meteor shower in my mind).  Our heroes, also like Smallville, are young adults.  Unlike Smallville, they’re juvenile delinquents on their community service detail.  Oh, yes — this show is a bit twisted.

These aren’t particularly flashy powers.  You have a receiving telepath (she only seems to hear the thoughts of others, but doesn’t speak to them), a time traveler whose power is seemingly triggered by guilt and not under tight control; a young lady whose touch causes people to want to have sex, aggressive sex, with her NOW (I mentioned it was a little twisted, right?); a fellow who can turn invisible; and a fellow who figures he _must_ have a power, but can’t figure out what it is.

Misfits is currently available on Hulu.  They’re just starting to show the third season, which has already been broadcast in the UK.

Watching the first season, I found each episode very good, but thematically all over the map.  You start out with an origin episode that’s relatively straight forward.  You move on to an episode that’s a full on sex farce (yes, there’s a reason Hulu wants you to verify your age – this is an R-rated episode, complete with nudity).  Moving on, you have probably the best time travel with consequences sequence I’ve ever seen as the guilt-ridden time traveler accidentally throws himself into a time loop he can’t seem to maneuver his way out of.  Every time he goes back in time, things _do_ change.  It’s a serious episode about regret that triggers hilarity in its aftermath.  You don’t really see what a comics fan would likely consider a proper super villain until the final episode of the first season.

Misfits walks a tightrope between melodrama and moments of humor that’s very, very wrong.  It manages to go places you just don’t expect it to go to.   For all the darkness of its comedy, Misfits does have a warm heart and even manages an angry youth, non-conformist take on the Prisoner’s “I am not a number, I am a free man” individuality credo in the final episode.

This is a show I don’t like to say too much about in advance, save a warning on how scatological it can be, as the ride’s better if you’re not quite sure what’s ahead.

For your convenience (though, I think this will probably only work in the US), the first episode is embedded below.

Image’s DIE rolls a win in the British Fantasy Awards

REVIEW: INVESTIGATORS: OFF THE HOOK is a fun, silly comic