Screenwriter/novelist turned comics scribe John Ridley has gotten a lot of positive reviews for THE AMERICAN WAY, his Wildstorm mini-series about superheroes, the Cold War and the Civil Rights movement. The collected edition comes out next week, but in the meantime, Ridley is getting a lot of controversy for his essays, such as the modestly titled The Manifesto of Ascendancy for the Modern American N*gg*r for Esquire, or this for The Huffington Post: It’s a Hate Crime, So Where Are Jesse and Al? : 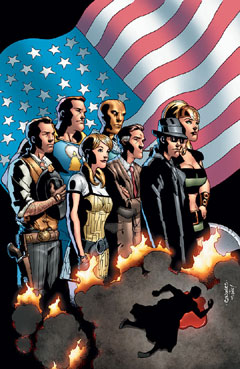 But the fact that blacks have been convicted for violence against whites is no cause in particular for documentation and certainly not celebration of this crime. Violence, and especially violence motivated by hatred of race or gender or religion or sexual orientation or merely the fact that the vic is “different” is deplorable.

Equally deplorable are those who pretend to stand for equality but who hypocritically allow such an injustice to pass without taking a stand against it.

If you Google around the political blogosphere, you’ll find a good bit of discussion of Ridley, such as this from Steve Gilliard at The News Blog:

Let me explain something, John, and you need to understand this. If the police shoot you in the street like a dog, those HuffPo readers won’t be there. All your pleasing commentary will be forgotten with “maybe he did something”. But if one of your cousins call Sharpton, he’ll show up and ask why the cops shot you.

D&Q to publish a new book by Mariko Tamaki and Jillian...