Earlier this week, Marvel released a teaser image by Ryan Stegman and Marte Garcia declaring 2022 the “Year of Vengeance” in anticipation of the 50th anniversary of Ghost Rider. Today the publisher announced in celebration of the milestone that Johnny Blaze, the OG Ghost Rider, will be headlining a new ongoing series debuting this February from writer Benjamin Percy and artist Cory Smith. No colorist, letterer, or additional members of the creative team were named in the announcement. 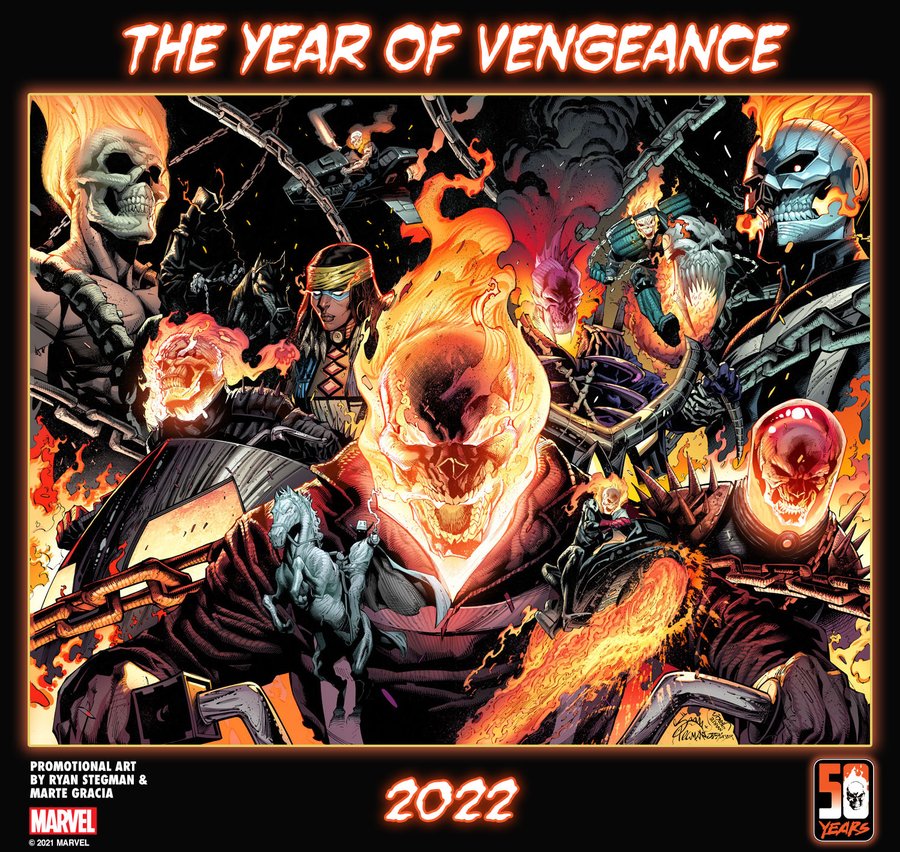 Known for his thrilling work on titles such as WOLVERINE and X-FORCE, Percy will put his own devilish spin on the Ghost Rider mythos, evoking all the frightening elements of Ghost Rider’s most classic stories while driving the Spirit of Vengeance towards a new age. And Cory Smith, known for his brutally beautiful artwork on titles such as CONAN THE BARBARIAN, is eager to bring the scorching action and hellish horror that only Ghost Rider can deliver! Together, this team of creators are hellbound to make this Ghost Rider’s most explosive era yet!

Johnny Blaze has the perfect life: a wife and two kids, a job at an auto repair shop and a small-town community that supports him… But  Johnny isn’t doing well. He has nightmares of monsters when he sleeps. And he sees bloody visions when he’s awake. This life is beginning to feel like a prison. And there’s a spirit in him that’s begging to break out!

In a statement announcing the series, writer Benjamin Percy described some of the influences for the book:

“I’m a horror head. I grew up reading Stephen King, watching John Carpenter, and listening to Black Sabbath, and when it came to comics, I always reached first for the dark and weird which means I read a hell of a lot of Ghost Rider. That flaming skull. That spiked leather jacket. That monstrous bike coughing out clouds of sulfurous exhaust. To this day, the sight of the character blazing along a midnight highway makes my heart rev like a four-stroke engine.

“Ghost Rider is arguably the best designed, but inarguably, the most heavy metal character in all of comics. It would be badass to write this series at any point in my life, but launching on the 50th anniversary feels especially (un)holy. Cory Smith is killing it on art, and we’re going to honor the past while burning rubber into a terrifying future packed with mystery, action, and shadow-soaked emotion. Prepare yourself for the ultimate in road horror.”

Artist Cory Smith also discussed what it feels like to be “riding shotgun” with Percy at the wheel:

“I’m incredibly excited to be riding shotgun with Ben Percy as we bring Ghost Rider screaming into his 50th anniversary,” Smith added. “As a comic nerd and a horror nerd, Ghost Rider has always been a favorite of mine so this project is a dream come true. Johnny Blaze, the Spirit of Vengeance is BACK. We’re firing on all cylinders and I can’t wait for everyone to see the hellfire we’re bringing! It’s about to get crazy!”

Check out the cover by Kael Ngu below and look for Ghost Rider #1 to arrive in stores in February 2022.

The Marvel Rundown: All hail the eternal bulge in A.X.E.: DEATH TO MUTANTS #2

The Marvel Rundown: Cassandra Nova takes over in MARAUDERS #3

SPX ’22: The Year of Magical People

PREVIEW: It’s girl vs. locker in THE BIG ADVENTURES OF BABYMOUSE...

HISTORY OF X: Wolverine (1982) by CLAREMONT and MILLER