We begin the annual review of Free Comic Book Day titles by reviewing the titles aimed at young readers and kids at heart! A third of all titles this year are aimed at this market, which is good news for you, because many of them can be found at your local library!

Four titanic tales of pure fun and entertainment for everyone to enjoy! First up. It’s no dog and pony show here! Bringing back the iconic puppets from the San Francisco Bay Area “Charlie and Humphrey”!! The modern-day Gumby and Pokey! A true love for al ages featuring a tale by Justin Sane and John Hageman! Next up is “Red Dawn” Written and created by Brandon McKinney, with inks by Bill Anderson and vibrant colors from Ross Hughes!! The government has created the first “controlled” superhero doing the bidding of a shadow operation until things go bad leaving our hero to blame and now on the run. The following story is only exclusive to this FCBD edition. Written by Greg Boucher and illustrated by Victor Moya they bring you “Rock and Roll Biographies: FIGHt” See how a troubled Rob Halford leaves the world biggest heavy metal band to form his own supergroup and take metal back!! Our last preview is written by Mel Smith, illustrated by Frank Cirocco/Alex Sheikman and hand colored by Gerhard! “Becoming Frankenstein” takes down the journey of a troubled Victor Frankenstein as he grieves the loss of his mother while harvesting the body parts of victims to create life again for his monster! Learn the tales of the victims and who they were before they became what becomes Frankenstein’s ultimate creation! : This will be the only edition to feature this Rock and Roll Biographies story featuring FIGHT

Printed on newsprint, which recreates an 80’s style of small-press comics content. There’s a superhero working for the government, funny animal antics, a rock’n’roll biography, and the origin story of Frankenstein.

It’s all professional, and I didn’t think it a waste of time. But I’m not likely to seek these comics.

Mrs. Jeepers may – or may not – be a vampire in this funny and spooky series from Graphix Chapters.
The third graders at Bailey Elementary are so hard to handle that all of their teachers have quit. But their new teacher, Mrs. Jeepers, is different – to say the least. She’s just moved from Transylvania into a spooky old house in Bailey City. She wears a mysterious brooch that glows as green as her eyes. Could Mrs. Jeepers be a vampire?
Featuring a beloved story by Debbie Dadey and Marcia Thornton Jones and fresh artwork by Academy Award winner Pearl Low, Vampires Don’t Wear Polka Dots is the first-ever graphic novel adaptation of Scholastic’s classic chapter book series.

I was too old when this series hit shelves, but I see it regularly at the library, and you’ve got to admit, those titles catch your imagination! Each teacher is thought to be some sort of occult creature, with the third graders trying to find out the truth!

A coming-of-age middle-grade graphic novel featuring a girl with severe allergies who just wants to find the perfect pet!
At home, Maggie is the odd one out. Her parents are preoccupied with the new baby they’re expecting, and her younger brothers are twins and always in their own world. Maggie thinks a new puppy is the answer, but when she goes to select one on her birthday, she breaks out in hives and rashes. She’s severely allergic to anything with fur!
Can Maggie outsmart her allergies and find the perfect pet? With illustrations by Michelle Mee Nutter, Megan Wagner Lloyd draws on her own experiences with allergies to tell a heartfelt story of family, friendship, and finding a place to belong.

Accessible, falling under the Graphix sub-genre of bibliotherapy comics, pioneered by Raina Telgemeier‘s Smile. The story is fictional, but also explains about allergies. (Yup, that’s how allergy tests work, but for me, they used my back, and tested many more allergens. And then it was a weekly visit to get a shot. And no, I didn’t get a comic book. :( )

Celebrate the world of the the Four Nations with two all-new stories from Avatar: The Last Airbender and The Legend of Korra! Your favorite characters from both generations of Avatar teams bring you some food for thoughtmore than a few laughs along the way!

I’ve never seen the cartoon, or even read the comics (aside from the FCBD tales). You can read these stories not knowing a lot about that world and still enjoy the stories. The backup story about Iroh’s tea house is fun, as Iroh must deal with a difficult customer…

The City of Gloomhaven isn’t “safe” at the best of times, but lately, more folks
than usual seem to be disappearing. In a city paralyzed by an unknown menace,
only one adventuring crew will do: The Jaws of the Lion! Based on the hit
games, GLOOMHAVEN and JAWS OF THE LION from Cephalofair Games,
comes a fantasy adventure with humor and heart.

It’s a comic based on a board game? A decent story, but it doesn’t encourage me to read more.

THERE’S NO BUSINESS LIKE HORROR BUSINESS!
Ruthie and Ezra Dillon’s dad and uncle just bought an old Hollywood movie studio.
And while the family has plans for reviving it to make scary movies for a modern audience, the monsters hiding in the backlot have other ideas.
Ruthie and Ezra are eager to star in their family’s films, but they’ll soon find themselves in a real horror show with Wolfenscreem, the Lagoonatics, and the Wasp-Keeper… who are all ready for their revival with a vengeance!
Soon to be a television show on Disney+, delve into the mind of all-ages horror master R.L. Stine (Goosebumps) with artist Irene Flores (Heavy Vinyl) and discover the world of Just Beyond.

A cool idea, and lots of fun background tidbits for fans of monster movies! It’s R.L. Stine for kids, but I think most fans of the genre will enjoy it.

My name is Grace, not “Kyle’s little sister!”
Having a good-looking, friendly, outgoing older brother sucks-especially when you’re the total opposite, someone who likes staying home and playing video games. Your parents like him better (even if they deny it!), and everyone calls you “Kyle’s little sister” while looking disappointed that you’re not more like him. I was really hoping I’d get to go to a different middle school, but no such luck. At least I have my friends…until he finds a way to ruin that, too…! Argh! What do I have to do to get out of his shadow?!

The Last Kids on Earth and their friends each tell their own best story of the Monster Apocalypse, including Jack’s high-stakes baseball game, Globlet’s attempt to take over the world, Quint’s bad-day-away invention, Dirk’s bragain with a witch, and June and Skaelka’s creepy carnival-plus a surprise story from some bad guys on the run…

Based on the popular series, this is a fun, done-in-one story. It doesn’t really give a sense of whole monster-apocalypse, but it’s fun and inventive (inside joke, read the story!) and I’ll read the series as comics.

There’s nothing better than a beautiful sunny day reading comics, so join us for a look at this summer’s fantastic all-ages reads, courtesy of Oni Press! From the gentle, magical worlds of The Tea Dragon Tapestry (by K. O’Neill), The Sprite and the Gardner (by Rii Abrego and Joe Whitt), and Mooncakes (by Suzanne Walker and Wendy Xu), to the action-packed debut of Chris Samnee and Laura Samnee’s Jonna and the Unpossible Monsters, there’s something for everyone. Grab a glass of lemonade and enjoy!

Four snippets, all worth a further look as graphic novels!

Despite the pandemic and the swirl of world events, back issue comics are booming! It’s not all record prices (though there are many) or bargain basement deals, but rather it’s many different categories! The team that brings you The Overstreet Comic Book Price Guide shines the spotlight on this exciting part of the universe of comic books. Includes tips on how to collect, care for your comics, and preserve them, among other things.

Unlike previous editions, this is all-comics, explaining the basics of collecting. The most interesting aspect of this comic are the advertisements for the myriad guides Overstreet publishes.

The Smurfs are back! To celebrate the new animated TV series premiering on Nickelodeon Fall 2021, Papercutz is releasing a new series of graphic novels entitled THE SMURFS TALES. This new series is three times bigger than the previous SMURFS Papercutz graphic novel series, and what that means is a lot more Smurfs plus other beloved creations by Peyo such as Johan and Peewit, the young page and the court jester; and Benny Breakiron, the super-powered little boy. Join Papa Smurf, Smurfette, Brainy Smurf, Hefty Smurf, and so many smurfy others for fun and adventure in the comics that inspired the cartoons, toys, and Nickelodeon series. But be careful, Gargamel, Azrael, and trouble never seem to be too far behind!

Four short stories by Peyo, including one superhero tale!

Celebrating 30 years of the world’s fastest hedgehog! There’s no telling how Sonic will react when he sees the results of Amy Rose’s new hobby-she’s been making tell-all comics about her adventures with Sonic, Miles “Tails” Prower, and their friends! New York Times bestselling author Gale Galligan (The Baby-Sitters Club graphic novels) spills the beans! Plus, fun extras to catch readers up on Sonic’s ongoing adventures, on the road to issue 50!
Sonics 30th anniversary celebration will be a huge priority for IDW and Sega this year!

The front story is fun, as Amy makes comics about Sonic and friends! The backup story condenses five volumes of storylines and events into twelve pages of comics! 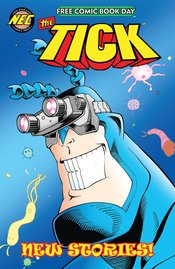 Cancelled? They were one of the regular participants in Free Comic Book Day, and the stories were always fun. Go find the graphic novels!

Jewish mythology has it that when God created the universe, He left one corner of it unfinished. Opinion is divided on why, but everyone agrees that the Unfinished Corner is a dangerous place full of monsters. Twelve-year-old Miriam neither knows nor cares about the Unfinished Corner. She’s too busy preparing for her Bat Mitzvah, wrestling with whether she even wants to be Jewish a peculiar angel appears, whisking her, her two best friends, and her worst frenemy off to this monstrous land with one mission: finish the Unfinished Corner.

This is Vault’s young reader line of comics, and this looks like an interesting story! There are also two shorter previews: Wrassle Castle by Tobin & Coover; Verse by Sam Beck. All three graphic novels are available this Fall.

Comics Crowdfunding Round-Up: ALLISON STRANGE, EVERYTHING IS DIFFERENT NOW, and 3...