Recently, Wizards of the Coast announced the release of Jumpstart: Historic Horizons. And it is HISTORIC. Jumpstart: Historic Horizons follows up on the heels of last year’s smash success of Jumpstart, a set that allowed players to smash together two themed booster packs and start playing Magic: the Gathering immediately. No muss, no fuss– no time spent searching card catalogs or deckbuilding. Just pure action!

The Beat has been given the exclusive opportunity by Wizards of the Coast to preview the Goblins themed booster pack from Jumpstart: Historic Horizons, and our first preview card from that pack features one of the unique digital-only mechanics we previously alluded to. Meet Managorger Phoenix:

Did you catch that? “It perpetually gets +1/+1.” Unlike most cards that have power boosting mechanics, once you grow Managorger Phoenix, nothing can undo it. Your opponent can kill it, but it will only come back even stronger. Your opponent can bounce it to your hand, but once you play it, it’ll be as big as it was previously. Even if your opponent tucks Managorger Phoenix into your library, it’ll stay as big as it was when you draw and play it again. This is the kind of card that couldn’t exist in paper Magic due to the difficulty of tracking stat changes in hidden game “zones” like your hand or library, which normally are known only to you or to neither you nor your opponent (imagine trying to track four different copies of this in a paper game!). In Magic: Arena, however, the fancy computers handle all that work for you! And thus, you simply get to enjoy this major threat that will put a fast clock on your opponent’s life if they don’t constantly take action to stop it.

And that threat could get even faster thanks to our next preview card, Reckless Ringleader:

Yet another card with the “perpetual” text! Reckless Ringleader has got to go fast, and he’s ready to help you make your Managorger Phoenix soar off to the races with speed as well as fury. Since you have a chance at getting both of these cards in the same Goblins booster pack, there will be plenty of games where you’ll get to not only play Managorger Phoenix over and over again, but also make sure it can attack as soon as it returns to the battlefield from the graveyard!

The third digital-exclusive card you might open in your Goblins booster is Sarkhan’s Scorn:

Unlike the first two cards, Sarkhan’s Scorn needs information that you could theoretically keep track of in a real life game of magic. Serra Avenger has previously played in this space before. However, who really wants to keep track of turn numbers? Better to let the computer do it so you can focus on BURNING.

Of course, the Goblins themed booster from Jumpstart: Historic Horizons features plenty of cards beyond the digital exclusives– and they’re the ones that help this pack earn its namesake.

Below, you’ll find a chart that features all the possible cards you can open in the Goblins booster.

You’ll notice that most cards only show up a certain percentage of the time in a given card slot. For example, while you will always open Dragon Fodder, Krenko’s Command, Battle Squadron, and Goblin Dark-Dwellers in every Goblins pack, you have an equal 1-in-3 chance to open Foundry Street Denizen, Weaselback Redcap, or the brand new Reckless Ringleader. This adds even more variance and replayability to the Jumpstart: Historic Horizons format, giving you incentive to open more packs and instantly build more decks.

Jumpstart: Historic Horizons arrives on Magic: Arena on August 12th. With 31 new-to-Magic digital-exclusive cards and more than 40 uniquely themed boosters, there are infinite possibilities to explore. Are you excited to dive in? 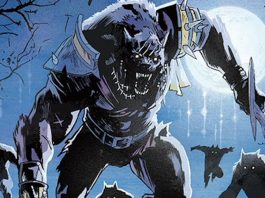 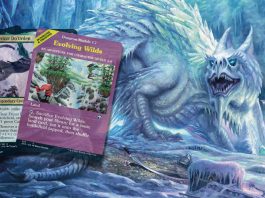 MAGIC Meets DUNGEONS AND DRAGONS in the first ADVENTURES IN THE... 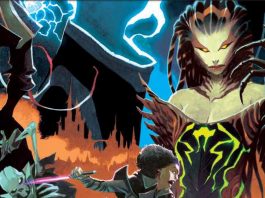 REVIEW: MAGIC #1 drops you in a vast universe and doesn’t...