The Chicago Comic & Entertainment Expo, also known as C2E2, is set to begin Friday!  If you’ll be attending, here are some helpful hints on how to make your way to the North Building of McCormick Place!

Just so there is no confusion (at least from this website)…

C2E2 has changed locations once again at McCormick Place!  There are four buildings, and this year, C2E2 is in the NORTH Building (directly east of the Hyatt).

First, here’s the official link to Reed Pop’s info!  That includes car, taxi, train, and plane!  (I assume those using less traditional methods such as flight rings or rocket boots should approach low from the east over Lake Michigan–to avoid triggering area radar–and enter the convention center from the Lakeside Center.) 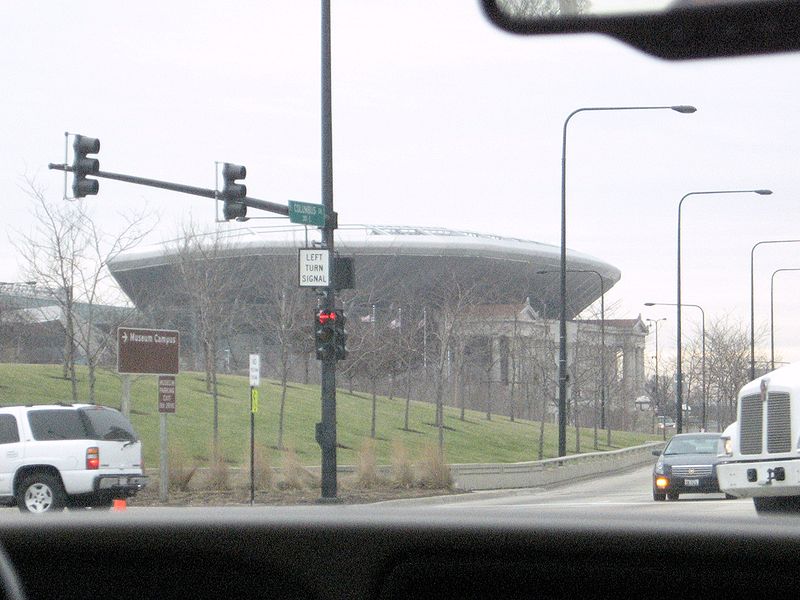 If you’re using Google maps (or other map software), McCormick Place is located near the juncture of the Stevenson Expressway (I-55) and Lake Shore Drive (Highway 41).  If looking at a bird’s-eye-view of the city, follow the lake shore south until you hit the Shedd Aquarium and Northerly Island Park, which juts into the Lake.  Soldier Field is the other landmark there… it’s the building that looks like a UFO crashed on top of a stadium.  McCormick Place is south of the park, at approximately 23rd Street.  Or follow Interstate 55 east until you hit the Lake.  McCormick is directly north.

Here are a few tips on traveling to and from the C2E2 convention at McCormick Place. 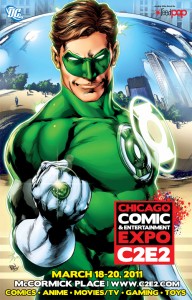 1)  The train (Metra). This is Chicago’s commuter train line.  The line you want to take is the Metra Electric line to McCormick Place.  If leaving from Millennium Park, the cost is $2.75.  HOWEVER, this is a commuter train, and runs less frequently on the weekends.  Also, on the weekends, McCormick Place is a FLAGGED stop; the train only stops if there are people on the platform, or if you notify the conductor ahead of time.  On the weekend, trains leave about every ninety minutes.  Metra does offer a weekend pass.

The platform is a bit spooky (the center is built over the platform), but walk northwards to the stairs, which will lead you directly to the Convention center.  When you enter the Center, turn left, and walk to the North Building.

Nice, but not convenient.  Info here.

If you’re a Green Lantern fan, you can replicate last year’s C2E2 poster at the Cloud Gate (AKA “The Bean”) located in Millennium Park a few yards from the Metra station entrance.

2)  The subway. Take the Red Line to Cermak-Chinatown.  Then hike eastward along Cermak, or catch the #21 bus to the convention center.  $2.25 one way (bills and coins), and the Chicago Card will save you time and money (as well as grant free transfers).  The Green Line does not stop near McCormick, but it does connect to the #3 bus at King Drive, which you should take northwards, although it looks like the station has limited access.  The Pink Line also connects with the #21 bus on Cermak further west.

3)  The bus. The #3 and #21 buses stop in front of the McCormick West Building.  The #3 runs north along Michigan all the way to downtown.  The #4 bus also runs along Michigan, but only on Michigan Avenue.  It does not go to the convention center.  You’ll have to walk two blocks along Cermak, or transfer to the #3 or #21.  If you’re coming from downtonwn, catch the #3 and do some sightseeing.  As always, ask the bus driver if the bus is headed to McCormick.  Cross the street and look for the giant C2E2 sign.

4)  The shuttle. C2E2 is sponsoring shuttle buses. Information is available at the convention, as well as the Concierge desk in the South Hall.  If shuttles use the exclusive busway, travel times will be faster than regular surface traffic.  Hotel shuttles are located on Level One of the South Hall, near the IGN Theater, behind the concierge desk.

5)  The taxi. Outside the South Hall, near the Hyatt, is a taxi stand.  I asked my hotel concierge about the cost, and she said it would be about $17 (from the Loop to McCormick).  If you can’t get to the train, bus, or shuttle, then this, of course, is your last resort.  If you have a lot to carry, this will probably be the most convenient mode of transportation.

6)  The car. http://www.mccormickplace.com/maps_direct/maps_dir.html has a map of the area, as well as information about parking.  Lots of space, but the flat fee is $19 a day, each time you enter the garage.

Google Maps offers street views for most of the area.

7)  The miscellaneous. If traveling from above, DO NOT LAND at Meigs Field.  It is no longer an airport, and once you land, you will be treated as a celebrity by the local constabulary, complete with round-the-clock news coverage, front page coverage on all local newspapers, and private accommodations with an around-the-clock security detail.  If necessary, your privacy will be protected by flying you to a remote government-run spa in the Caribbean.

Otherworlders often mistake Soldier Field as an interdimensional Trans-Port terminal.   The terminal is actually located at the Pritzker Pavilion in Millennium Park, but reservations are required, as the broadcast grid is sometimes used for concerts.  Higher dimensional beings can use the Cloud Gate located nearby.  While primitive, it does offer enough perpendicular trangentials to accommodate the eleven classical dimensions of this reality.  From those, the infinites can be easily excessed.

Chicago is based on a grid.  The center of all directions is State and Madison, located within the elevated loop downtown.  East-West streets are numbered from State; North-South streets are numbered from Madison.  Numbered streets follow the grid numbering, and all subway/el train stations post the coordinates on the station signage.  McCormick is approximately 2200 South, 400 East.

INTERVIEW: Al Ewing talks body horror and politics in IMMORTAL HULK and GUARDIANS OF THE GALAXY

C2E2 ’20: Dive into Marvel’s latest event with their EMPYRE panel

C2E2 ’20: Jim Lee discusses the future of DC Comics during his spotlight panel

EXCLUSIVE: Love in the time of sex robots in THE SHORT...

RANGERS OF THE DIVIDE, BUCKAROO BANZAI, and more in the Dark...

REVIEW: BRZRKR #1 is knee-deep in blood but not in story, yet