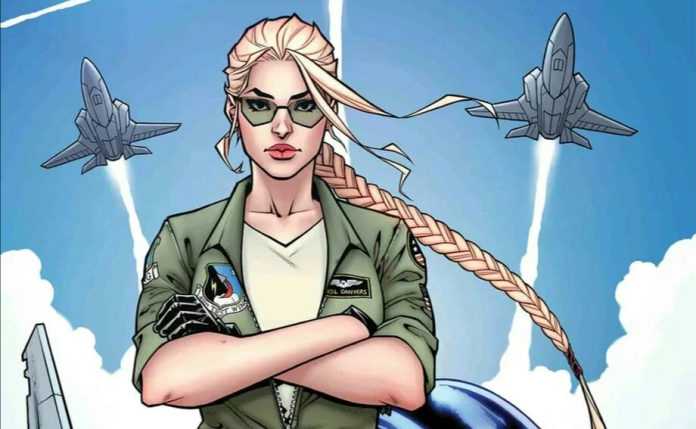 With the release this past weekend of the most anticipated sequel from the `80s, Top Gun: Maverick, here at The Beat we thought that we could put together a list of the best Top Gun-like comic book characters that could jump in a cockpit and give Captain Pete “Maverick” Mitchell a run for his money. While there are a lot of characters that know how to pilot a plane, these characters know how to “…turn and burn!”

Before becoming an intergalactic Top Gun at ring slinging with the Green Lantern Corps, Hal Jordan was a test pilot, and before that an officer in the United States Air Force. In more modern times he’s gone back to being an Air Force officer splitting time between the GL Corps and the USAF. Even with his power ring’s ability of flight, Jordan still thrills at flying unaided in a fighter jet.

While we think of everyone’s favorite blue-eyed member of the Fantastic Four as the muscle, this veteran ace brings substantial experience from his days as a combat/test pilot. As he was initially a fighter pilot in WWII, for comics continuity, this shifted from WWII to the Korean War and has since coincided with what is the most recent war. His flying skills would make him a sought-after astronaut, specifically to his former college roommate, Reed Richards, as they would travel together in an experimental spacecraft.

One of the most powerful Avengers spends her time ensuring the security of Earth, being an Avenger, and holding the rank of Colonel in the USAF. From flying top-secret missions during the Cold War with Nick Fury, Ben Grimm, and Logan, to working security at advanced space centers and time-traveling adventures, Danvers is always ready to fly.

United States Marine Corps pilot James Rhodes made his way to the Corps from the city of brotherly love, Philly, where he would be sent to fly over the jungles of Vietnam. It’s there that Rhodes would meet industrialist Tony Stark, escaping in his first Iron Man armor from his enemy captors. Eventually, he would join Stark’s club, “piloting” the Iron Man armor and then his own War Machine suit. For a time, he would stop using the War Machine armor and fly a mech suit called Manticore that was more aircraft than armor.

A skilled expert pilot, Nelson fought against the Axis powers during WWII in an experimental aircraft, nicknamed “Birdie”. The aircraft’s wings flapped like a bird’s, giving Airboy an even bigger edge in aerial maneuverability.

When America’s top-secret anti-terrorist task force, codenamed G.I. Joe, needs to control the sky, they look to their hotshot pilot, Ace. From his teenage years, Armbruster had a passion for flying, starting as a Hollywood stunt pilot, to joining the US Air Force. After becoming an instructor to the USAF’s Fighter Weapons Squadron “The Aggressors” – the Air Force version of the Navy’s pilot combat training school, Top Gun – Ace eventually joined the GI Joe team. An expert flier of the Skystriker XP-14F (a modified F-14 Tomcat) he is also skilled at handling any F-class fighter. In addition to his skills in the cockpit, he’s an experienced intelligence officer and poker player, the latter giving his callsign a double meaning.

A venerable mainstay in the X-Men’s rotating roster of members, with many teammates capable of piloting, Summers is the X-Men’s Top Gun. Whether it’s a civilian cargo plane or the high-tech Blackbirds that carry the X-Men into battle, 9 times out of 10, he’s the one behind the stick pushing the envelope.

At the end of the 21st century, Earth is under attack from a race of artificial intelligence. The squad rises to Earth’s defense using the historic Tuskegee Airmen as their inspiration. These young hotshot pilots fly high-tech combat fighters, the P-5000 Mustang, fighters that are capable of transforming into bipedal mech mode for ground combat.

The Angels are a group of teenage space pilots looking for payback after the Earth has been destroyed. Operating from the last Human colony, Libor Space Station, these intrepid pilots – Fox, Deuce, Tank, Dragonetti, and Legz – must compete in the QuantumEliteSpace Tournament for the title of Supreme Squadron and join the battle against the alien empire called the Eukarya.

The continuity of Blackhawk is constantly modernized and updated to fit current sensibilities, but for the most part, his origin maintains that at the height of WWII, Blackhawk’s original squadron faced off against German forces. Outnumbered 4 to 1, he was able to take out 6 fighters before he crashed. Looking for revenge, he assembled a special fighter squadron, The Blackhawks, consisting of veteran pilots from various countries, to fight the Nazis in Europe.

Flying their Grumman XF5F Skyrocket fighter aircraft, they operate from a hidden base known only as Blackhawk Island. After the war, the Blackhawks would continue operating worldwide on clandestine missions for the U.S. government under the guise of an air freighter service.

Who are your favorite comic book pilots? Let us know in the comments! 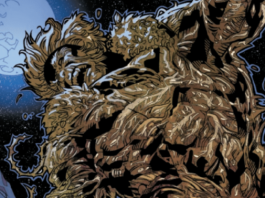 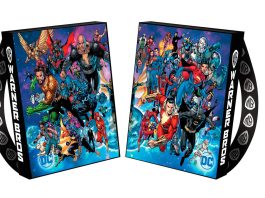 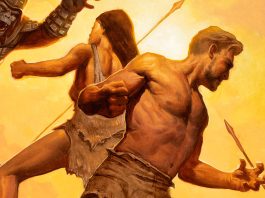 Get your paws on Marvel’s new PLANET OF THE APES omnibus...