NBM just announced it’s line of graphic novels for January and beyond and it’s a stunning line-up with work by Kerascoët (artists on Miss Don’t Touch Me, Beauty and Beautiful Darkness), Annie Goetzinger (Girl in Dior), P. Craig Russell and more from the Louvre series of GNs, including one by the great Jiro Taniguchi. While NBM doesn’t get a lot of splashy  consistently put out a strong line of very thought provoking work, and their translated French comics are always outstanding. (This year’s Lulu Anew was the topper for me.)
Here’s the list with catalog copy:
DECEMBER 2015

THE FAIRY TALES OF OSCAR WILDE V. 5: The Happy Prince

Now in paperback! The Happy Prince is arguably the most famous and well loved of Oscar Wilde’s nine fairy tales, rivaled only by The Selfish Giant.

The Happy Prince has died young and his soul inhabits a beautiful ruby encrusted statue covered all over in gold leaf. From his perch high above the city he is witness to all the poverty, misery, and hopelessness in which his people have been living. When a small barn swallow in flight to the warm south ahead of the approaching winter stops to rest upon the statue the Happy Prince prevails upon him to delay his travels in order to remove his gold leaf a piece at a time and shower it upon the poor citizens. Out of love for the Happy Prince the swallow does his bidding. As the days pass the Prince’s beauty is stripped away and as winter sets in the bird’s fate is sealed. In the spring the townspeople finding only a dull statue with a broken lead heart and a dead bird consign the worthless objects to the ash heap. Only an emissary of God recognizes them as the most valuable treasures of the city and brings them to the gardens of heaven.

CRUISING THROUGH THE LOUVRE
David Prudhomme 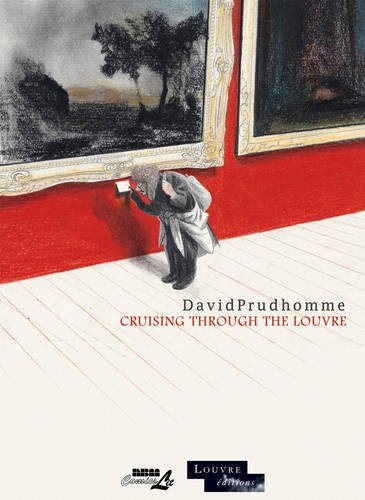 Author David Prudhomme meanders through the Louvre, feeling as if in the panels of a giant comic while he himself is creating his own. In this institution, all manner of people from all over the world rub elbows quietly. So he decides to cruise through the Louvre at a quick pace, not to look at the art but to observe the people and their interaction with it. He discovers: a group of students somehow stuck together just like the shipwrecked on the Raft of the Medusa; a man behind the Seated Scribe, as if attempting to read over his shoulder; in the hall of antiquities, a woman placing her head in a lion’s mouth… For two hours, Prudhomme is witness to a strange silent and casual choreography, danced in the midst of one of the most prestigious museums in the world… 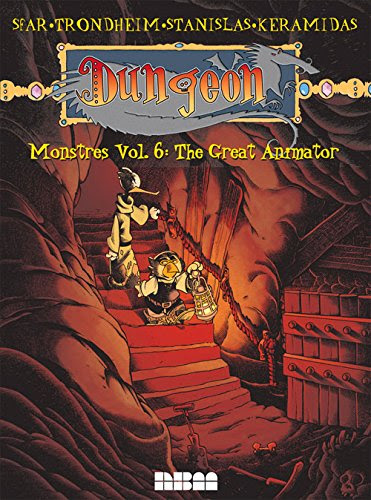 In an automaton themed volume, ‘The Great Animator’ pits the predecessor to the Vaucanson great castle and realm against a huge army of ruthless invaders. The great castle’s army of battle automatons evens the fight but at great cost. In the second story, ‘The Inventor’s Grimoire’, the Vaucanson grimoire with the secrets of building automatons has disappeared! If it fell in the wrong hands, much harm could come of it. And indeed, it turns out the greedy Lord Delacour has snatched it with the intention of auctioning it off to the highest bidder! 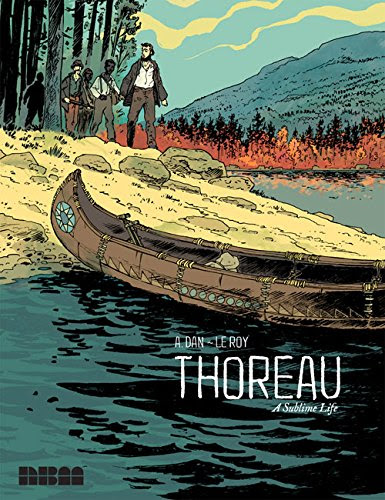 “To be a philosopher is not merely to have subtle thoughts, nor even to found a school, but so to love wisdom as to live according to its dictates, a life of simplicity, independence, magnanimity and trust.”

This graphic novel biography relates the forward looking inspirational life of the great author, philosopher and pioneering ecologist. Henry David Thoreau was also the father of the concept, still fresh today (viz ‘Occupy Wall St.’), of ‘civil disobedience’ which he used against slavery and the encroachment of government.

The Louvre Collection: GUARDIANS OF THE LOUVRE
Jirô Taniguchi 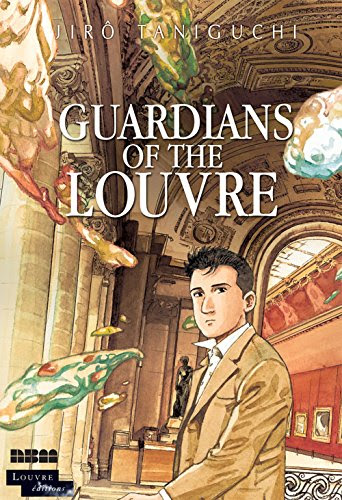 A famous manga artist provides the latest entry in the Louvre collection of graphic novels. After a group trip to Europe, a Japanese designer stops in Paris alone, intent on visiting the museums of the capital. But, bedridden in his hotel room with fever, he faces the absolute solitude of one suffering in a foreign land, deprived of any immediate or familiar recourse. When the fever breaks somewhat, he sets out on his visit and promptly gets lost in the crowded halls of the Louvre. Very soon, he discovers many unsuspected facets to this world in a museum, meeting artists and their works from various periods, in a journey oscillating between feverish hallucination and reality, finishing at the crossroads between human and personal history.

With this inner journey, Jiro Taniguchi invites us on a temporal and artistic trip to discover a sense of place under the leadership of some tutelary figures that appear to him, familiar or unknown … the guardians of the Louvre. 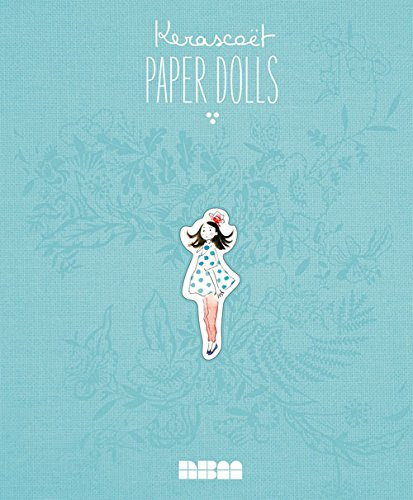 This magnificent art-book presents for the first time the work of the Kerascoëts, a married couple known for the very successful and stunning graphic novels Miss Don’t Touch Me, Beauty and Beautiful Darkness.

Sensitive and colorful, they have chosen a classification in their own image -names of metaphorical colors linked to sensations- that will lift the veil on the immensity and diversity of their work in comics, animation and advertising showing sketches, studies, paintings, even work on textile.

A real visual treasure for amateurs of art books and graphics! Debossed clothbound book with cut-outs, stickers and more, every page a discovery. Strictly limited to 1000 numbered copies. 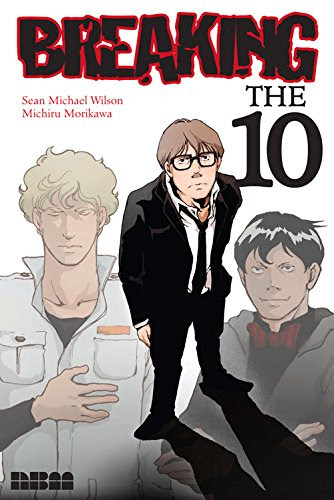 When David loses his wife and child in a tragic car accident he decides, in anger at the cruelty of the event, to turn against God. He sets out to systematically break each of the Ten Commandments in order to both spite God and to get his attention! But will he go all the way, and break the commandment ‘Thou shalt not kill’? Two mysterious figures, Mr White and Mr Black, try to win David over to their side: the religious or the humanistic. Deeply sad in parts and comical in others, this modern story explores age old questions: Is there a God? And if there is, does that God care about us? By the author of The Story of Lee. 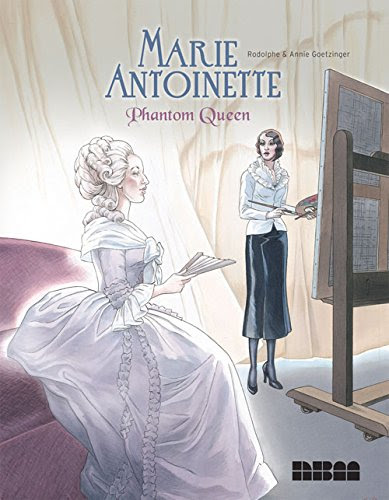 During the 1930s, Maud, an artist, discovers she has a psychic gift. The first signs manifest themselves in the royal gardens of the Trianon where gradually she understands that a woman from the beyond is attempting to communicate with her.

The revelation is beyond belief: it is the ghost of Marie Antoinette appearing to her to share a terrible secret that has tormented her for centuries. After being guillotined, the Queen is said to have been thrown into a common grave but then exhumed and buried with her husband, Louis XVI, in the Saint-Denis basilica. Yet the ghost tells Maud that her remains are still in the pit, on which a chapel stands today. The queen asks Maud to move her body to the right place so she can finally find peace and no longer haunt people.

Part fantastic ghost story, part biography, this is a delicious beautifully illustrated look into French revolutionary history by the artist of the bestselling Girl in Dior.’

INDIE VIEW: ‘Expelling My Truth’ and ‘Stay’ demonstrate how to cope

Harrison Ford returns for one more adventure in INDIANA JONES AND...

The Marvel Rundown: Two times the SPIDER-MEN in the latest DOUBLE...

DC’s LAZARUS PLANET expands with REVENGE OF THE GODS miniseries

PREVIEW: There’s plenty of blame to go around in SHOCK SHOP #4