Home Entertainment Television A Tolkien Nerd’s Rings of Power Recap Ep 6: In which all...

With  “Udûn”, episode 6 of The Rings of Power, this show reveals itself: it’s the guy on the team who can’t really finish a sentence but can smash the baseball out of the park. Rings of Power finally sets aside its clumsy human melodrama and turns to one of the things people love most about Tolkien: battle. Brutal, desperate battle, some warriors on the side of living and joy, some on the side of…the same thing but from a different perspective.

Welcome to this amateur Tolkien Scholar’s analysis of The RIngs of Power. Previous episodes here.

There are three central events that shaped Tolkien’s life: his mother’s adoption of Catholicism and his own conversion, his love for Edith, and perhaps underlying it all, his time as a soldier in World War I. Falling victim to trench fever in the Battle of the Somme – one of the most appalling moments in recorded human history – he began working on the legends of Middle Earth while recovering in a hospital. This horrific experience was never far from his work, whether in expressing the escapism needed from these dire times, or his underlying sorrow for the pointless conflict and cruelty that result when powerful rulers send innocents to war for their selfish goals.

All of which is to say that war and battle in Tolkien’s work are not just action for the sake of action, but dramas of morality and heroism; character tested and judged.

“Udûn”, the sixth episode, introduces a new director, Charlotte Brandstrom, and also graphic bloodshed, harrowing close-ups, thrilling action and a huge twist that finally ties in with the legendarium in a wholly – to this amateur Tolkien scholar, at least – satisfying way. Brandstrom, a veteran of The Witcher, Outlander and Jupiter’s Children, brings a fresh and spectacular look to the doings in Arda. It’s worth noting that no one tasked with running this show, the most expensive in history, had actually run a show before. It’s almost like they figured it out as they went along, and finally hit their stride. Also, honestly, with that $1 billion budget, spending some of it on battle scenes like these is money well spent.

So let’s go to the recap! MASSIVE SPOILERS AHEAD! Beware!

As the episode opens, Galadriel, Miriel,Halbrand and Co are steaming towards Middle Earth on three proud Númenoriean vessels. Isildur is actually sharing an apple with his horse, Berek, in a shot that does not cutaway! Props to actor Maxim Baldry for that! Númenorians canonically loved their horses, and he went above and beyond with sharing the same food.

Meanwhile, the humans of the Southlands are under attack from Orcs led by the corrupted elf, Adar, who gives a Braveheart speech to his own troops! Psych! The Orcs march into the tower of Ostirion only to find it deserted…except for Arondir, who unleashes a trap that brings much of the tower down on the Orcs. It holds them back long enough for dawn to break (orcs can’t travel in the sunlight) and Arondir gives his own little Braveheart speech to the survivors, gathered back in their village. It prompts him and Bronwyn to go off to share a tender moment and, at last, a kiss. Bronwyn even delivers that “After this is all over we’ll build a little cottage” speech that foretells death in the ensuing battle though! Is she doomed?

The battle that follows is intense and thrilling (although abandoning a well guarded tower meant for defense for an open village is…questionable) and I won’t give a blow by blow account, but there’s lot of bloodshed, including an “injury to the eye” sequence that rivals anything in Game of Thrones for icky. At first the humans seem to have repelled the Orcs, but they make a grim discovery – Aronidr notices red blood creeping from a corpse. Orcs have black blood. Removing the masks, the humans discover they’ve been killing their own former friends and neighbors. It’s a moment very Tolkienian in its tragedy and sorrow. But before they have much time to process it, a second attack starts, led by a volley of arrows.

An orcish arrow pierces Bronwyn’s shoulder, which is followed by an extended scene of battlefield surgery from Theo and Arondir – is that cottage of the future just a dream? She revives but the humans are trapped in their keep. But just as the battle seems to be going Adar’s way, guess who arrives? Numenor had come at last!

The battle that follows shows Galadriels’ incredible horse skills, reveals not all of Isildur’s besties are meant for the long haul, and gives everyone some heroic moments. I really appreciated the sudden shift to unflinching violence and mayhem here; while cutesy Dwarven humor and frolicking Hobbits are also part of Tolkien, the shock and loss that war brings is, as mentioned, a deep part of his work.

Adar escapes into the woods, pursued by Galadriel and Halbrand. Then shocker: Halbrand asks Adar if he remembers him! And Adar doesn’t know Halbrand – just who the hell is Halbrand, anyway? Staying Halbrand’s hand from killing Adar, Galadriel questions the dark elf and we get what is, for those deeply versed in Tolkien’s writings, the payoff to a lot of speculation.

Galadriel realizes that Adar is one of the Elves enslaved by Morgoth in the First Age – or as he says “Call us Uruk,” says Adar. While the internet had all kinds of crazy theories about Adar being an elf from the SIlmarillion, the truth is more devastating: he is one of the original corrupted Elves who was captured by Morgoth in the First Age and metamorphosed into an Orc. This is not only a stunning visualization of the history of Orcs, but a major step forward in how they are being portrayed.

As mentioned several times, while Orcs are one of Tolkien’s worst inventions as dark-skinned evil doers who make for mindless fodder in war, he also knew this was a flaw. In his later letters and jottings, he strove to make an origin for Orcs that wasn’t just pure evil, and struggled with their origins, shifting from having them be corrupted Elves to corrupted men and never settling on a defined canon.

With Adar, the Rings of Power team has finally brought that aspect of the Orcs to light. They are not just fodder…they are a race of beings who have goals and plans. Adar’s scheme is not just to kill good for the sake of being evil…it’s to elevate his own people, to give them agency to walk in the sunlight. That’s why he got to give a Braveheart speech.

For more on this, Asher Elbein wrote a truly excellent essay on Orcs in Tolkien, their problematic history but potential redemption.

Adar also claims to have killed Sauron! Is this possible? See below. The scene between Galadriel and Adar is the best in the show thus far – the performance of Morfydd Clark as Galadriel and especially Joseph Mawle as Adar are right on the money, with the latter’s eerie presence elevating the character even more.

Galadriel reveals herself as quite bloodthirsty, desiring the end of all things Orcish and the death of every single one of them. At the end of the interrogation, it’s Halbrand who must stay Galadriel’s blade when Adar delivers a sharp retort: “’It would seem I’m not the only Elf alive who has been transformed by darkness. Perhaps your search for Morgoth’s successor should have ended in your own mirror.”

Oh wow! Nailed it! This puts a lot of Galadriel’s asshole behavior in perspective – although she didn’t go along with Uncle Feanor’s worst deeds (Kinslayings and ship stealing and more) she was proud and desired her own kingdoms. Hence her exile in Middle Earth.

Then some more shockers: After the battle, Galadriel and Halbrand share a quiet moment where he reveals that “Fighting at your side I felt ….if I could just hold on to that feeling. Keep it with me always. Bind it to my very being.”

“I felt it too,” says Galadriel, as they share a lingering look.

WHOA. All aboard the good ship Halbrandiel! (only a few dozen stories thus far on AO3, but I’ll keep monitoring.) Actually this ship has been steaming along since this show started, and Charlie Vicker’s ability to shoot a smoldering look is leading the league. In the books, as mentioned before, Galadriel has already wed Celeborn, a mighty Sylvan Elf she met back in Valinor. Where is Celeborn now, and does he know that Sauron Halbrand is sharing battle lust with his girl?

At that moment MIriel calls Halbrand to her side. Miriel and Bronwyn, now looking in fine fettle despite her earlier blood loss and battlefield cauterization, share a nice moment, but Miriel reveals that Brownwyn doesn’t have to bear this burden alone. Here is Halbrand, King of the Southland, ready to lead! Noble Aragorn vibes all around!

In the next moment, a shocking reveal. The Morgul blade has been footballed between a bunch of folks, but is now in Theo’s possession but wrapped up in a Middle Earth furoshiki. Unwrapping it, Theo discovers it’s been replaced by a hatchet?

Where is the real Morgul blade?

Well, remember Waldreg? The human who led the revolt back to Adar is surprisingly efficient, and has assembled the hilt into a sword and uses it as a key to start a process that Adar had long planned: a dam bursts, flooding those underground tunnels the Orcs were building, and flooding into a dormant volcano causing a pyroclastic event, aka a volcanic explosion.

Galadriel turns and faces a vast cloud of volcanic smoke and ash that envelops her and the village and….roll credits. 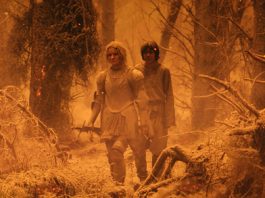 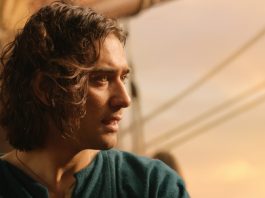 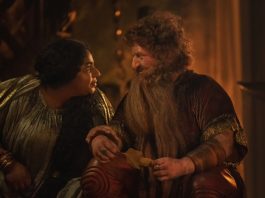