Well that’s the short hand version. Basically, back in the 90s, Jim Lee bought two piece of Jack Kirby art. At the time everyone was unaware of the backstory as to how they were created: as told in fictionalized form in the Best-Picture winning film Argo, Kirby had created the concept art for a film version of Roger Zelazny’s Lord of Light which was later used as part of the cover story to smuggle Americans out of Iran during the 1980 hostage crisis.

Lee purchased the art via Barry Gellar, the producer of the Lord of Light film (sorta played by Alan Arkin in the movie) who was selling it to help pay for his kid’s college tuition:

The gambit worked and the six were brought back to the U.S., though the CIA operation that rescued them remained classified for another 17 years. In the meantime, Lee bought his Kirby works at the Sotheby’s auction with no idea of their historical significance. Similarly, Geller didn’t know the true cultural and monetary value of the illustrations when he sold them to help pay for his son’s college tuition (with Kirby’s permission). He wouldn’t find out that they had a relationship to a CIA operation for another seven years, when he saw Mendez on an episode of Errol Morris’ First Person describing the CIA plot and how they ”stole the script from the Lord of Light.”

Lee was also unaware of the art’s significance until he read about it along with everyone else.

Now, however, Lee told THR, “I have four kids going to college,” he said. “It’s time to balance needs and my love for the art.” Lee and his wife Carla Michelle have eight children with one more due this fall, so even when you’re co-publisher of DC Entertainment, that’s a lot of kids to send to school.

So there you go. Jack Kirby Concept Art: sending kids to college for 20 years.

The art is being auctioned off by Heritage today here and here. At this point it’s still pretty affordable given the art’s history. too bad there isn’t a comics museum with a good endowment because these should be in there.

As a footnote to this story, we’ll say again, for the 100th time, imagine if Jack Kirby had had the long fulfilling career as a concept artist that he should have had? 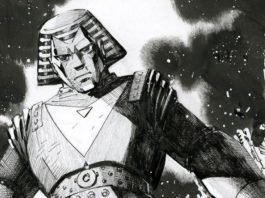 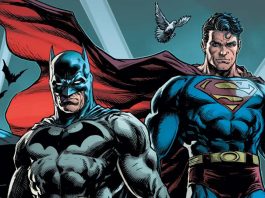 The WORLD’S FINEST return in new series from Mark Waid &...